Super rains lash Andhra Pradesh for 2nd day, ending 8.30 am on 26.10.2014The depression intensified into a Deep Depression and lays about 1270 km west-southwest of Mumbai and 910 km east-southeast of Salalah (Oman). It would move initially north-northwestwards during next 48 hours. It would intensify into a cyclonic storm during next 12 hours and into a severe cyclonic storm during subsequent 24 hours

Sunday morning, AS-1, a Deep Depression,  is now in the complex situation we had estimated it to be 4 days ago !...Recalling, we had discussed that by 26th, the system would be in this situation, and its track would be determined depending on the upper streams wind flow (See chart given on 22nd October )...

Today, AS-1 is trapped between the High in the NW and another in the SE...

Sunday Morning: Located at 14.2N and 63.0E, having moved NE. On Sunday morning it is at the second red spot in the Vagaries forecast chart (See below, NE of Saturday position).Its estimated core winds are at 35 knts. System has started showing a clear centre now in finer imageries. The trough in the 500 levels is expected to persist on Sunday.

Vagaries expects it to follow the forecasted track in Vagaries. { Do we see dry air "trying to encircle it ? This is a real testing system ! }
Next Update @ 3.30 pm IST..Sunday

Mumbai: Sunday will be cloudy and cooler at around 28c..few light to medium rain showers in parts.
Pune: Overcast and light showers in the day. Some heavier showers in ceratin parts. Day will be around 22/23c.
Mahableshwar will be overcast and foggy, with some showers. Cold day.

Goa will be overcast with persisting rain. Rainfall will be less than past few days, but can expect around 50 mms by Monday morning. Cool day at around 28c.
See Vagaries Goa for Latest Updates

AS-1 moving along the track given below...as of now...on Saturday night located at 13.3N and 62.5E, thus having moved NE from previous location...Strength constant.
Next update 9.30 am IST Sunday..

Due to a trough in the 700 mb and 500 levels over Maharashtra, a huge mass of cloud has been attracted towards the inland areas....

AS-1 is currently located as a Depression at 12.5N and 61.3E. Estimated core pressure at 1000 mb and estimated core winds at 30 knts..soon will be upgraded to a Deep Depression. The Upper level trough with strong westerlies have pulled in moisture over the Central India region from the circulation, and hence moved in medium to high clouds over the West Coast, N.I.Karnataka , Maharashtra , MP, Gujarat and Chattisgarh. See Image of Mid upper trough 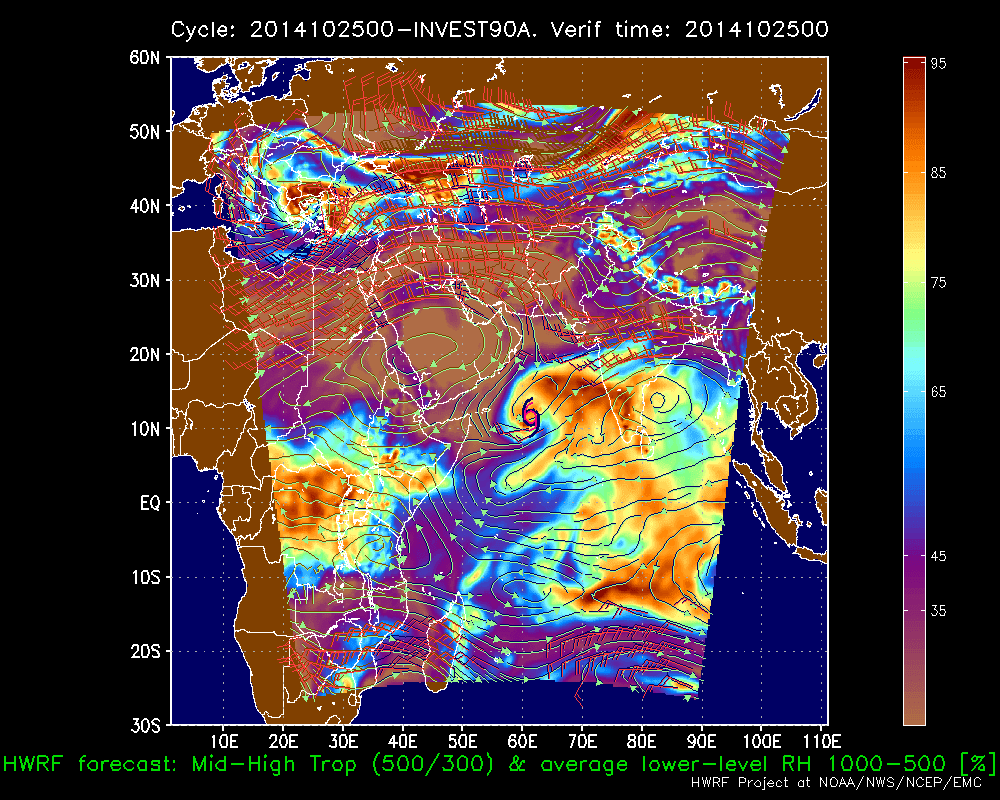 As we discussed a few days back, the situation would get better (for judging the track) from 25th.
It seems now, that AS-1 will somewhat follow our Vagaries track "B".
Deep Depression would initially track NW, after a brief NE track) and most probably would go as far West as around 59/60E, where it encounters drier air mass, and re curve first NE and then E/NE towards Gujarat. As per current scenario, would estimate it to head as a cyclone ( Nilofer) towards Saurashtra tip, Okha /Dwarka. Maybe around 30th October. Current state of weather shows winds increasing to 70 knts in next 48 hrs.

Southern Oman gets heavy rains from Monday night thru Wednesday, as the system "skirts " the coast. Muscat can get showers on Tuesday 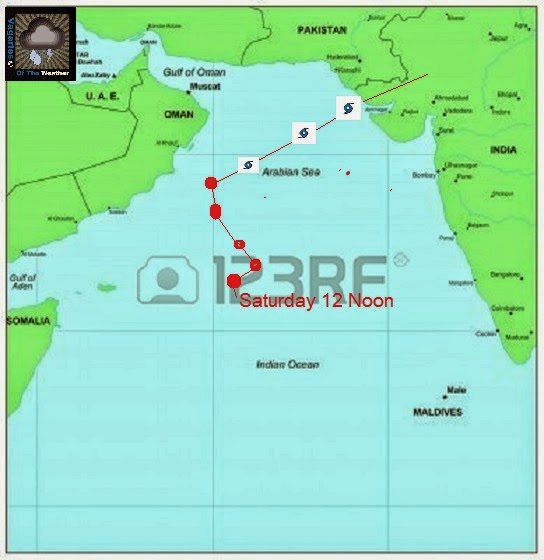 Mumbai is overcast with medium/High clouds, and occasional drizzles. Currently at 28c, which should be the max for the day. Expect some showers Saturday evening and Sunday. Should be decreasing from Sunday evening.
Pune getting frequent light showers also. Showers Saturday thru Sunday till Evening.

Vagaries Goa reports of torrential rains in Goa. Margao saw 123 mms, Quepem 60 mms and Panji 20 mms. till Saturday morning. More on Vagaries Goa.
Goa sees showers continuing till Tuesday.
This is Vagaries' view and estimate, not binding, and not to be used for commercial purposes.


3rd day of heavy unseasonal rains in Karnataka, ending 8.30 am on 26.10.2014
The depression intensified into a Deep Depression and lays about 1270 km west-southwest of Mumbai and 910 km east-southeast of Salalah (Oman). It would move initially north-northwestwards during next 48 hours. It would intensify into a cyclonic storm during next 12 hours and into a severe cyclonic storm during subsequent 24 hours

Sir Heavy rain expected in Thar region due to #Neelofar ?

Raja: Yes...some rains possible..
Comments on FB:
Cmdr Potey:Cotinuous light drizle all the way from khopoli to kolhapur till noon on my way

shiraz:Mahabaleshwar: Gusty wind from the East with chill

Mitan: Exactly sir....this track i was saying when genisis of As-1 has formed...any chance of light rain in odisha???

Dadar Mumbai getting Darker I just pray for some rain. As wegot nothing from the cyclone.

rajesh sir plz tell us about sindh because sindh want this system badly because of extreme drought in all province.