Location Position as on Thursday, 24th, Evening:
The UAC has descended to sea level, and is at 3N and 82E, South of Sri Lanka. Core pressure at 1004 mb and 15 knts winds. Readers, please check location on map, and suggest if we should number this as BB (from Bay) or AS (from Arabian Sea) ??
Anyway,do not under estimate its strength. Its maximum effect is in Sri Lanka. Chief amounts of rainfall in Sri Lanka today: Auradhapura 64 mms, Tricomalee 60 mms, Mannar 55 mms, Jaffna 43 mms.
Observing the current parameters, Movement and precipitation expected along the track predicted by the Vagaries Map put up yesterday.

Keeping Sunday's weekly forecast in mind, and following it up:

We see the has formed, numbered 98B, by NRL. But, instead of forming off the T.N. coast as expected, it has formed much lower. After moving due west in the last 12 hrs, the UAC is stationed at 3N and 82E, S/SW of . Now, Vagaries had expected the system to form much to the North, and cross the T.N. coast as a sea level low by Thursday, but being South, it will cross and move West into the .

Should descend to sea level as a low in the next 2 days.

Though less than expected, T.N. will receive heavy rains from Thursday and rains spreading inland.Inland, districts in the East, SE and the Northern regions of the state will receive good precipitation Friday/Saturday.

Chennai will get precipitation amounting to 5-7 cms on Friday, increasing to 7-9 cms on Saturday, with squally winds from the NE. 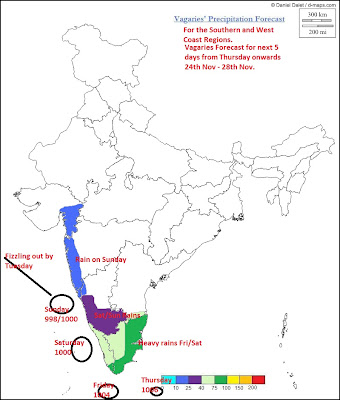 By Friday, the low (should be around 1002 mb then) will just enter the regions. And Saturday will see the low track N/NW and run parallel to the west coast.

See the Vagaries Forecast Map put up.Rainfall colours are as per the key.

Its my personal view that the system will deepen to 1000 mb and move NW to fizzle out as shown.

A fresh W.D. is moving across the North regions, and will precipitate in the hills. Cloudy weather for Punjab, Haryana and Delhi next 2 days.

Mumbai "sobered" down on Wednesday, 23rd. We had expected some relief after Tuesday. S'Cruz was 34c and Colaba's high was 33c.

Tonite (Wednesday night) we may see S'Cruz dropping to 18c.

Pune too kept the schedule, and was better today at 29c as the high and 11c as the minimum.

The Low at 1004 crossing right across mumbai on 28th.. can we expect some rains and decents winds in Mumbai from sunday night onwards..??

rajesh, but all the charts shows, it heading more towards along mumbai and towards gujarat coast..???

It looks like low will first move northly direction along the west coast till south konkan & after that it will move northwest wards. This unseasonal lows r far more erratic than monsoonal low, things can change with every run of forecast. But one thing is sure Mumbai will get atleast light to moderate rains on monday/tuesday. And that will be repleys moment.

the day at panvel was very pleasant today provide much needed respite from the torment of everydays heat!!!!@svt like me ur also from the rare type of ppl in tthis blog who wud welcome the rains!!!!! A w.d is also affecting north india,,,,it can steer the low towards us!!! Ryt now their is no clarity,,according to sum models mumbai may receive heavy showers while sum r predicting only light rains!!! Anyways m not very hopeful as how the rains from two systems ditched mumbai ,,,in favour of oman !!!!lets see whether mumbai can opens it ne monsoon figure or not..?????!!!!

@rajesh accrding to my suggestion u shud name this system on bay of bengal,,,,even though 3 N 82 E is an are neither in bob or arabian sea,,,in fact it is in the indian ocean ,,,but still this area is very much nearer to the boundary of bay of bengal,,,coz usually arabian seas boundary can be drawn l by connecting a line from thiruvananthapuram to th protruting edge of somalia(horn of africa),,,,so the system shud efinitely be a named on BOB!!!:)