On Saturday, NEM very active in T.N. and Kerala. Heavy rains in Lakshdweep Islands.
Very heavy rainfall of 180 mms recorded in Varkala (Kerala), Pallipattu (Tiruvallur dt) and Coonoor 160 mms each, Papanasam (Tirunelvelli dt), Tiruvallur and Rameshwaram (Ramanathapuram dt) 150 mms each.
Kodaikanal receiving 128 mms had a high of 13c on Saturday, while Ooty was 15c during the day. Chennai (Mnbkm) received 84 mms ,while Ngmbkm managed 51 mms on Saturday.
Bangalore was a pleasant 23c during Saturday, with light rains in the daytime (5 mms).
(Latest and Mumbai forecast by 10 pm IST Sunday)
AS-4 at 10.7N and 72.3E, now 360 kms West of Cochin, as on Sunday Morning.Tracked NW, but slow in movement. Now, some European models are talking of the storm fizzling out at 20N ! 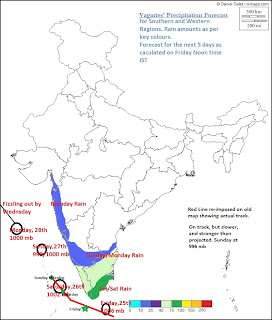 The latest on AS-4 as on Saturday, 26th night:
System has moved W/NW in the last 6 hrs from this blog report, and is now positioned at 8.7N and 74.9E. Actual position is 200 kms SW of Cochin.With core pressure at 996 mb the eastern segment of the system is showing winds at 35-40 knts (max). Strengthening is due to increase in vertical wind shear to 25 knts (positive).
There is active precipitation around the centre and to the West of the system centre. As predicted yesterday, Kerala and the Lakshdweep Islands had heavy rainfall on Saturday (today). Thiruvananthpuram and Agathi received 40 mms each. Minicoy had 34 mms.
Meanwhile in 24 hrs ended Saturday morning, Venkatgir (Nellore Dist) in South A.P. had a very heavy downpour of 230 mms, and Uthiramerur (Kanchipuram dt) received 200 mms. In T.N,hill station Kodai recieved 112 mms with the day's high at 14c on Friday.Rainfall in T.N will decrease from Sunday.
Due to favourable SST at 31c, and possible increase in wind shear, system will deepen a bit more till Monday, when surface winds would reach a max of up to 50 knts, and as mentioned, will start to weaken from Tuesday and fizzle out in a couple of days.
As system is tracking as per Vagaries' predicted path, there is no need to change or reproduce the same Vagaries map for future tracking ! -:)).
I expect some light rain on the coastal regions of South Gujarat and Konkan on Monday due to the spiralling of the clouds from the system, during its peak period (Monday). After that the clouding should decrease as AS-4 weakens (Shitij).
Mumbai forecast as put up yesterday.
For Coastal Sindh (Pakistan), other than clouding, and very light rain (traces, nothing meaningful) on Tuesday/Wednesday,I do not expect anything. Reason for clouding phenomena over Sindh has been described yesterday on this blog.
Next Update Sunday morning 10 am IST
By Rajesh at November 26, 2011

@rajesh as far as i know nellore dist is in andhra pradesh!!!!!

junaid: thanks for pointing out my typing error ...rectified.

Dear Rajesh,
I have been watching AS-4 and what you have pointed out came TRUE. As pointed out by you, rains in TN will decrease from SUNDAY[27-11-11]onwards
The winds at Chennai are SEly now and still it is raining. But it is indication to cease.
There is chance for another wet spell and floods occured similar in Thailand may occur at TN.
Yesterday [261111]the state reported an avarage of whoofing 54.8mm rainfall.There was WIDESPREAD RF in all 32 districts of TN.