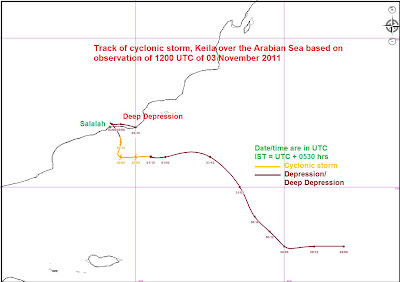 AS-2 is hovering (skirting) along the coast line as this track chart (up t0 5.30 pm IST) shows. And weakening rapidly. Existing clouds over Gujarat and Kutch would clear by Friday. Clouding from AS-2 over Karachi would also disappear by Friday.
AS-3 position as on 5.30 pm IST Thursday: Low at 70E and 12.5N with core pressure at 1006 mb.
Expected to deepen by Friday and as mentioned earlier, move North initially. Rain for coastal Karnataka and some rains in Goa on Friday/saturday.
After reaching 15N, I would expect AS-3 to move NW and then possibly curve Northwards, heading for the Pakistan Sindh coastline.
No "firm" system coming from the Bay till the 8th/9th, when I expect a system to emerge (see Vagaries November forecast ). Till then rains will be scanty with isolated pockets of medium heavy rains in T.N.
After the moving away of AS-2, and whatever its effect on Mumbai, the heat has returned...Mumbai is now bearing up with the "November Heat "

Hottest in on Thursday, 3rd November, was 36.4c at Vallabh Vidyanagar ().

Mumbai was almost as high..marginally lower than being the hottest in ...Thursday's high was 36c at Colaba 4c above normal, and 35.9c at S'Cruz, 3c above.

Vagaries’ November Forecast has been added to the links on the right side of page for easy reference.

sad sad very sad !!!!! I doubt whether the probability of mumbai cooling exist now,,,,@rajesh ur forcast on as-3 is in sync wid other most of international forecast even bbc predicts this path but why the hell that stupid system is changing its path at 15 N???? Exactly at the doorstep of maharashtra???? NE monsoon has been very unfavourable for mumbai ,,,,coastal karnataka getting excess rain while its cousin konkan goa nothing!!!! !:( :( atleast the max temps shud go down!!!in mumbai we r in the zone wich is currently the hottest in india @ rajesh can u give the meteorolgical explanation why coastal mah nd gujarat gets heated up so much during post monsoon season..???? Even during nov its damn hottt

Our friends Rajesh,Junaid - if they state Mumbai is hot then I think they are incorrect.

Places like TamilNadu,Rayalseema, interior karnataka are almost 360days hot -always temperature is above 36-40 degrees except for few days during NE monsoon (if it rains) then temperature drops to 30s. Infact God has blessed Maharastra with abundant rains (5 months of excess rain + most rainest spot (Amboli), myself don't think we require rain - october/november temperature fluctuation is normal during transition period for Mumbai and then winter sets with bang - rhythm of nature beats!!!

Myself do not agree about NEM - it is still very weak over TN/ Rayalseema/ interior Karnataka - No depression has crossed this time which can bring rain above 20cm. All low pressures are set between 5-10 degrees latitude and tend to drift NW. This is a peculiar fact observed for this NEM 2011 and none are formed over southeast bay. [as Rajesh has stated earlier MJO is in that line- 5-10degree latitude]. Now dry period has set in. Predictions of depression over TN and NEM excess are yet to be seen given the fact that only 30days more are left before NEM ends and winter sets.

Junaid, seasonally speaking NE monsoon is not expected to bring any rainfall to Mumbai (leaving aside some sprinkles here and there), while we have had systems crossing around Mumbai in November and last year did see more 'rain' days in November, I would say these are exceptions rather than a norm, hence I would say that stating the NE monsoon has been 'unfavorable' to Mumbai is incorrect. The weather (with all it's vagaries) is doing what it should, yes we all could do with cooler temperatures. In any case rain / cloudiness over the city will bring with it increase in Humidity levels making it even more uncomfortable. I completely agree with sset, we have had bountiful rains this SWM, let us have 'normal' weather.

Also, a system crossing over / around Mumbai at this time would be detrimental to agriculture

absolutely correct, anonymous and sset. Junaid, expecting rain now would be unseasonable. and sset, 36c for Mumbai is a bit hot -:))
Junaid, I explained and estimated the path of AS-3,that does not mean there can be no rain in Konkan -:))
It all depends on the convectivity which brings more cloudiness in a system, that is which segment of the system will have clouds.

Rajesh, what would cause AS3 to move NW and then North after crossing 15N?

@sset anonymous,rajesh thnx for ur feedback! But i wnt agree wid u on interior karnataka being hot,,,,in factt south and central karnataka being elevated experience agreeable weather year round,,,,while rayalseema nd tamil nadu have highest average annual temps in india..?i do know that expecting rain in novembor is a little outstretched but i am biased towards rains... Anyways south nd central konkan require sum rain in novembor coz its beneficial for rabi crops ,,, immediately aftr the monsoon withdrwal the western parts of india like rajashtan gujarat nd mah r relatively hotter than rest of the country wich dries the moisture!!!and the october showers wer much enjoyed by mumbaikars as we got a respite from the cruel heat..... Anyways sset i pray that tamil nadu interior karnataka shud receive bountiful rains afterall its their turn now!!!! :)