AS-4 as on Monday Night:
AS-4 at 10.30 pm Monday. Located at 15N and 68E, it has moved NW. Current location is 600 kms West of Goa.Winds at 35 knts and the strength is a bit reduced at present. But that is due to the night time "cooling", and as mentioned, system will attain peak strength tomorrow afternoon, and IMD will name it "Thane" at that time.
Map updated with current location of AS-4. Forecast kept constant, no change, to compare. Click here for larger view 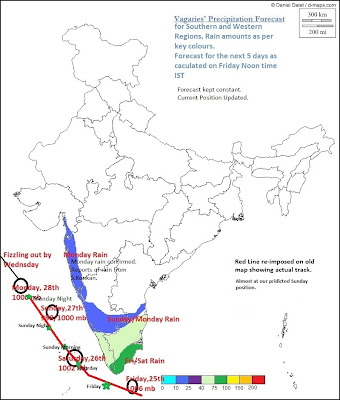 There are reports of some rain and thundershowers from South Konkan. Though exact amounts are not available, there is confirmed news of rain in Goa, Vengurla, Sawantwadi, Malvan, Devgad and Harnai.Rain amounts are between 5-25 mms.Vagaries had put up Monday rains 10-25 mms for the Konkan belt. Decrease from tomorrow.
AS-4 as on 2.30pm Monday: 14.4N and 68.7E...moved Due West since 11.30 am Monday.
Latest Image of AS-4 as on 2 pm Monday: 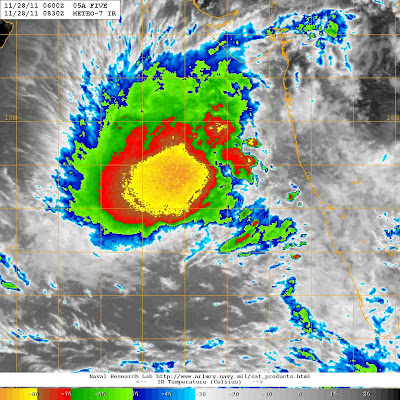 AS-4 on Monday Mid day:
AS-4, IMD has declared it as a deep depression now, is currently located at 14.3N and 69E, thus moving NW again, and steadily. It is due west of Mangalore on Monday morning.
This system has strengthened, and a deep convection is seen in the cloud mass N/NW of the centre. The thick mass is spread from 13.00N to 19.00N and 64.00E to 71.00E. In fact, the convection effect has towered the cloud tops to more than 18-20 kms in height, with the lowest minimum cloud top tempertaure touching -85c !
Well, it is expected to strengthen more, till Tuesday, when it would have reached its peak.After that, it will weaken considerably, and may not cross coast as a system at all.
Reason: The SST is 29c at the centre now, and is decreasing northwards.The ocean heat content is 80-90 KJ/cm2 as on the system's location now, but becomes less than 40 KJ/cm2 towards the North Arabian Sea.The anti cyclone on the East coast of India is pushing westwards.
Saurashtra/South Gujarat coast and North Konkan will be cloudy and have light rains on Monday.
Indications show the clouding moving towards the Sindh coast from Tuesday.
By Rajesh at November 28, 2011

vengurla is my native place!!! :) but no rains at panvel:(

ahh no rains in mumbai..was so hoping for one...