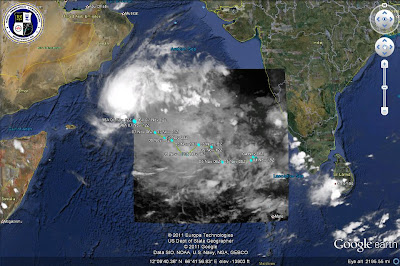 AS-3 on 7th November, at 13.2N and 60.4E. ( 8.00 pm IST Monday). Indicating a NW track heading towards Oman and gradually away from the Indian coasts.
However the system seems to have weakened as pressure now measured is 1005 mb, and winds are at 20 knts.
In a change of scene, due to "provocative" factors, the convection is now seen in the North of the system. As-3 will move NW and then curve Northwards for a short distance and weaken, before fizzling out off the North Oman coastline ( by Thursday at the most).
Winds at 200 mb could push upper clouds at that level towards the East over Sindh coast from Tuesday.Karachi would be cloudy on Tue/Wed.
Southern shores of Oman, and Salalah will start getting some rains from Wednesday. The rainfall may not be damaging, and will move up the coast on Wednesday/Thursday.
An effective W.D, N-1, is moving towards the sub-continent. Will be over the Northern regions of Pakistan by Monday night/Tuesday. Rainfall could be expected in the Northern plains of Pakistan and Balochistan areas on Tuesday and Wednesday. Snow in the Northern mountains is also not ruled out.
Islamabad will get light rain on Tuesday and Wednesday, with the temperature range between 26-11c.
Cloudy effect on upper Sindh areas.
N-1 would be moving into India from Tuesday night/Wednesday. Precipitation is expected in Kashmir and H.P, with snow on the hills. Punjab and Haryana will get cloudy weather with light rains. Chandigarh will be cloudy on Tuesday and light rain is possible on Wednesday. Day will be around 27c.
Delhi will be cloudy on Wednesday with temperatures around 29c in the day. Fall in night temperatures after Thursday all over plains of North and NW India.
Pictures of N-1 clouding and rainy effect in Dubai on Monday sent by a reader (Priya) put up on Interactive Page. Rain to continue in Dubai on Tuesday.