For the West coast, Scene shifts from 93A to 95A.
93a, which was anyway fading and fizzling out slowly, is now substituted by another low, 95A.
The system to watch now is this new one. Presently at 1010 mb, and with 15 knots winds, it is currently at 6.4N and 66.8E.
Now, in the 28c waters, this low should deepen, and move initially Northwards. Forecast models predict the system to hit the Goa coast around the 12th, as a depression.
I would go by the direction and flow of the jet stream winds. The direction flow of the 200 mb winds on the 8th./9th. would give good indications and guidance to the track this sytem would take. 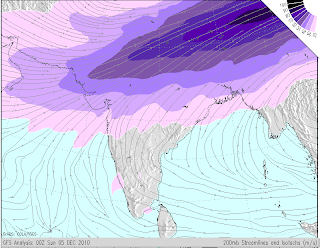 Todays 200 mb chart is put up above.
The East Coast low is at 10.3N and 80.2E with winds at 15 knots with core pressure at 1010 mb.
Riding on an Easterly wave, Low will linger off the North T.N./South A.P. coast for a couple of days, precipitating good rains along the East Coast right upto South Orissa. It is expected to continue pouring rains in T.N. and along the A.P. coast next couple of days.
By Rajesh at December 05, 2010