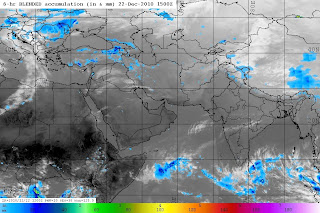 The accumulated actual rainfall map of the 22nd. has been attached to show the (vagaries) forecasted W.D, somewhat weak and feeble, as IMD has put it.

It shows some precipitation in the Ladakh region and some rains in the western region.

Rain/snow has also trickled into Northern and Central H.P. and extreme western as predicted.

The W.D. is expected to move away eastwards, and weaken or fizzle out.

The Cold Wave forecast map put up by Vagaries for 22/23/24 seems to “happening”.

The severe cold wave regions shown in the projection are the extreme frigid zone of Kashmir, where Leh has recorded -18c and Skardu in , (North of Drass) was -11c.

The “mild cold wave” predicted region of N.India plains, has seen slide down to 2.4c on Tuesday, and touching 5.2c. Parts of N.Rajasthan was cold as Churu recorded 2.2c.

In the Central India region, M.P.too was cold, with recording 6c, and the hill station of Pachmarhi going down to 1c.

In the Southern interiors, an unusual mild cold wave has come as a pleasant though uncomfortable surprise. Chintapalli in A.P. recorded 5.3c, and and Raichur 7c.

These areas can expect the cold to continue for another couple of days.

Vagaries will put up a temperature forecast map after 24th. When, we may see the nights getting warmer by 2/3c.

Precipitation forecast is : All dry till Saturday.

I see no W.D. or system on the horizon for another 5 days at least.

As an after effect of the W.D, ’s Northern region is now witnessing a moderate cold wave. was -4c and went back to 0c on Tuesday. recorded 2c, and , as expected, was 11c.

Here too, the cold wave should retreat by the 24th. When the night temperatures will be up by around 2/3c, from Islamabd to in the South.

With light precipitation in the extreme west, as shown in the map, the W.D. effect for is over.

P.S. I had a comment requesting for more frequent updates. Will surely try to do so. But please note, the Internationa Page, Mumbai Weather and Space News are also very regularly updated. Sometimes, one may tend to overlook these pages.

hey rajesh today i woke up to dense fog in the morning at panvel....which cleared only at 11:15 am,,,,but surprisingly found out that mumbai santacruz and colaba had a clear sky at 8:30 am according to imd,,,,wat abt ur area,,,i guess the denseness of fog wud to be sttributed to the high relative humidity, wich was at 96%,,,plz give ur opinion regardibg this

Few weather model forecasting moderate rain for north-west india (including delhi) on 30th dec. and even in central india in 1st week of jan. For junaid, yes, there have been very light fog in mumbai for last few days, but it lifts before 7.30 am.