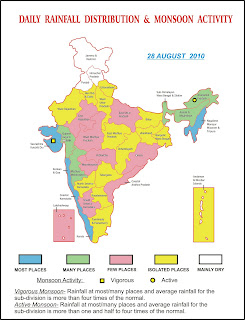 Summarising 28th August rainfall:
Mostly around the active vortex (UAC), and vigorous in Gujarat.
Some of the heaviest falls in cms.in Gujarat, West Mah. region as on 29th. morning:
Belapur (Thane) 12.7, Roha, Mahabaleshwar 11.9, Sidhpur 8.2, Harnai 8.0, Alibag 7.0, Panvel, Soegaon - 11 each, Srirampur, Kalyan, Vaduj - 10 each, Mahad, Tala, Harnai, Mandangad, Ulhasnagar - 8 each, Alibag, Bhira, Mangaon, Pali, Mhasala, Lanja, Thane, Ambarnath - 7 each.
Now, the current UAC, may linger around the North Mah.coast/South Gujarat coast till Tuesday. With this, I see rainfall continuing around this areas till Tuesday. Heaviest falls will be in the core of the UAC. So, in a way, I feel some heaviest rains could be expected in the Saurashtra areas and North Mah.coasts, but north of Mumbai.
South Gujarat shoulds get heavy rains on Monday and Tuesday.Maybe some heavy rain in
Bharuch on Monday/Tuesday.
For a brief look at the MJO situation, I directly quote from the Australian Buraeu: ""The MJO has displayed generally erratic behaviour, and has had perhaps the greatest influence on weather across southern Asia. Longer term, one would expect to see redevelopment of the MJ

O in the western Indian Ocean around early to mid-September. If this scenario were to play out, we would expect the increased risk of a reinvigoration of the Indian Monsoon, and increased potential for tropical cyclone development in the region".
Monsoon is in active phase as can be seen from the Indian Monsoon Index in the chart which shows above normal activity for the next two weeks:
ECMWRF forecasts another fresh UAC forming North of Mumbai on the 1st. of September,
tracking Northwards into Saurashtra coast, and fizzling out the very next day (2nd.Sept).
IMD sees a low in the bay by the 31st. I am not too optimistic on this low, not around this d
ate at least. Maybe a bit later, after the 4th. Sept. That's my reading of events.
I trust this Map of NCEP/GFS forecast to show the accumalated rainfall till 3rd. Sept.

With steady moderate day long rains in and around Mumbai, Sunday was a rainy and grey, with about 45 mms at Colaba and S'Cruz.(till 8 pm).
The lakes guaged up good rains on Saturday night/Sunday morning.In cms. they were:
Upp. Vaitarna - 13, Vihar - 7, Tulsi - 6, Vaitarna - 4, Tansa - 1.
As the UAC "activity" area is scheduled to be North of Mumbai, I see the heaviest rainfall from it avoiding Mumbai.
Monday/Tuesday will be frequented with periods of showers, some heavy and thundery. Windy during rain showers.Around 75 mms acccumalated for the 2 days.Decreasing precipitation after Tuesday night.
By Rajesh at August 29, 2010

From where do you get rainfall data @ lakes? what about Bhatsa lakes?

I am back in Mumbai after a gap of 4 days - was in north Ahmednagar district the last couple of days. Got a very wet welcome as I touched the city today morning with heavy to extremely heavy showers in different pockets of the city. I read 'vagaries' forecast for Mumbai for today and tomorrow, however I feel looking at the conditions now at SCZ, Suburban Mumbai looks set to register 200 - 250 mms of rainfall these two days.