World feeling the heat:
2010 is becoming the year of the heatwave, with record highs temperatures set in several countries.Several regions of the world are currently coping with severe weather-related events: flash floods and widespread flooding in large parts of Asia and parts of Central Europe while other regions are also affected: by heatwave and drought in Russian Federation, mudslides in China and severe droughts in sub-Saharan Africa. While a longer time range is required to establish whether an individual event is attributable to climate change,
The Monsoon activity in Pakistan and other countries in South-East Asia is aggravated by the la Niña phenomenon, now well established in the Pacific Ocean.The heatwave in the European part of the Russian Federation is associated with a persistent pressure ridge that appeared in June 2010. Initially, it was associated with the Azores high, but later was reinforced by a strong i
nflow of warm air from the Middle East.
Thousand of hectares of forest burned in the fires, leaving thousands homeless. For days, Moscow was shrouded in smog, and environmentalists raised fears that the blaze could release radioactive particles from areas contaminated in the 1986 Chernobyl disaster.
Wildfires have also swept through northern Portugal, killing two firefighters and destroying 18,000 hectares (44,500 acres) of forests and bushland since late July
The heatwaves have also been occurring in the US, where Las Vegas, Atlantic City, Washington, Baltimore and Trenton all documented their highest ever temperatures in July.
This June was also the hottest ever on record and 2010 is on course to be the warmest year since records began, according to separate data from the US National Oceanic and Atmospheric Administration published last month. 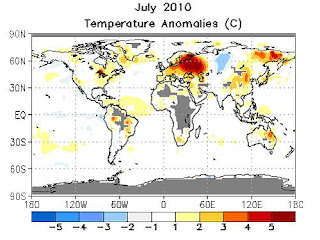