(Sorry for the delayed Postings).
Its been a day of mixed re-actions. weather-in-Mumbai wise.
Started of with the potential of good, heavy rains, with a big cloud mass forming overnite, and threatening the city with torrential rains. The satellite images put up, in the morning were indicative enough.
Then, during the day, it was yes and no.
Yes in South and Central Mumbai. Heavy, very heavy, rains lashed Central Mumbai right thru noon to evening hours. Flooding was the scene !
Colaba saw 55 mms till evening, while it was more in Central areas.
On the other hand, for some unanswerable reason, suburbs in the North had hardly any rains ! S'cruz recorded just 9 mms in the same period ! 9 mms, when conditions were very favourable for it to pour, and with dark overcast skies all day.( Maybe wanted to hold on to "vagaries" original forecast of yesterday -:)
No. I do not understand the differentiating. In fact, Colaba has been favoured throughout this season :)
I see the rains easing out in South Mumbai,(will have to bifurcate North n South now), and surely lessening, and back to heavy shorter duration showers, with around 15 mms of rain on Saturday, and sunny intervals with 15-20 mms on Sunday.Monday forecast will be put up tomorrow night.
As long as the trough along the west coast holds on, the possibility of vortice formations are always there. The trough has now shrunk, and runs from Karnataka to South Gujarat coast.
Now, there is a distinct possibility of a low forming in the bay, by the 23rd. 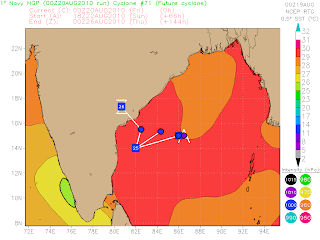 Forming at 100 mb,may go deep to 998 mb, before crossing the A.P. coast around the 26th. This is as per the NGP forecast model. (Which I feel may hold good).
ECMWRF estimates no system at all for around this date!
There is a dim possibility, maybe 20% chance, for this new low to move Northwards instead, and cross straight into North Orissa coast.I say this,as the time of approaching the East coast, there is a strongish W.D. approaching, which may alter the track of the system.
Rain and track, will discuss as the low forms.
Rains have also eased off along the T.N. coast, with chances of a push again from the 24th.
By the way, Delhi recieved its heavy rains (forecasted in "vagaries"), with almost 200 mms in 2 days. Thats quite a lot, what with Parliament House roof leaking !
The axis has moved North, and estimates of very heavy rains in U.P. and Nepal holds good for the next 2/3 days.
By Rajesh at August 20, 2010

Rajesh, I too have been noticing the recording of higher rain in Colaba as compared to S'cruz this season. Quite possibly it could also be due to increased construction activity in the suburbs.

i think even at South Mumbai it was localised. Was right near Fountain, fort from 11 to 3 PM. no rains until 2.30 pm, contradicting Rajesh's observation.

emkay, the rain pattern was very patchy. Worli recieved 75 mms in the day.