Some Cool News from the Antartica:
One site in East Antarctica did set a record lowest temperature this month.
Concordia station registered -84.7 C, which is -120.5 F.
This is getting near that all-time world low of -89.2C, or -129.6 F, tallied at the Vostok Antarctic station.
At Vostok, lowest this year has been -81.8 C, or -115 F.
Both Concordia and Vostok lie on the interior ice sheet above 3,200 meters.
Across the globe, this week's hottest temperature was 49.4c at Death Valley, California.
The week's coldest temperature -76.3c, at Russia's Vostok Antarctic research station.
Giant Iceberg Breaks off Growing – Growing! - Greenland Glacier:
We've seen those articles on the internet/press shouting that an iceberg four times the size of Manhattan broke off from one of Greenland's main glaciers, the biggest such event in the Arctic in since 1962. 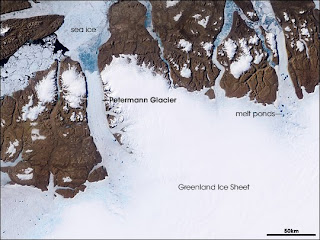 Many of those articles are trying to blame (so-called) global warming. But before we swallow that story, let's just be aware that Petermann Glacier has been advancing for years.The Petermann Glacier had been growing in size for seven or eight years. Nobody can claim this was caused by global warming.
The new ice island will eventually float into the Nares Strait, about 620 miles south of the North Pole between Greenland and Canada, said Muenchow. It could fuse to land, break up into smaller pieces, or slowly move south where it could block shipping,--- Remember the Titanic?
By Rajesh at August 21, 2010