Police are warning against all travel in the central belt in an unprecedented move as winds of more than 160mph batter .

Strong gusts: An easyJet plane is blown around in the wind as it lands at Edinburgh airport this evening

The Met Office said winds at Cairngorm had reached up to 165mph (264km/h).

Not everyday do you see a red weather warning issued for the main population belt of !

Residents across parts of are being warned to take action as "dangerous" stormy weather with gusts of over 100mph hit the country.

An Atlantic storm is set to bring strong winds to the for Thursday and Friday, with gale force gusts affecting many areas. 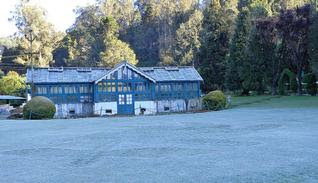 The Botanical Gardens, Ooty on Wednesday, 7th Morning !
Severe frost has hit normal life, particularly during the early hours of morning in Ooty.
Among the places worst affected are the Government Botanical Garden, the Race Course and areas around the Ooty Lake.
With the mercury plummeting, the minimum temperature recorded at the observatory was 4c, while in the garden station it was 0c on Wednesday .
By Rajesh at December 08, 2011

One can feel the chill in the air today n pune