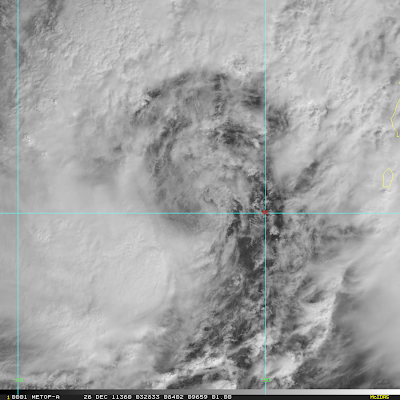 BB-12 now sshows a distinct feature,a spiral, indicating strong core winds, already recording upto 50 knts, or 90 kmph, and core pressure at 992 mb.See an extreme close up of the centre above.
Named "Thane", it is set to intensify into a cat. 1 or maybe 2 storm soon. It can be said so, as it is almost stationary, and constantly picking up moisture and energy from the 27c warm waters. In fact, its convective cloud top temperatures have now scaled , or bottomed, -90c !
But, a defiant NE "cold" flow, will resist its intensification to some extent. It may even stop at a certain stage deepening after 24 hrs.
The much anticipated ridge axis along the 12N line has formed, forcing "Thane" to slowly track NW now, and,it seems to be heading towards Chennai. The city has to be alerted for a severe cyclonic storm !Rough seas will be created, with 14-16 feet waves lashing the North T.N. coastline.This is a fore warning, as today, most of the high winds are to the N and S of the cyclone, not to the West.See image.

For all readers
Name "Thane" is synonymous with Mumbai - Navi Mumbai.

Pradeep - what exactly is ridge axis?? See below phrase.

" The much anticipated ridge axis along the 12N line has formed, forcing "Thane" to slowly track NW now, and,it seems to be heading towards Chennai. "

The ridge axis is a High Pressure belts and they change the tracks of a Cyclone. They are mostly responsible for the westerlies.

In this case of "Thane". These ridges will push the cyclone to curve back towards Chennai. It there was not a ridge. The cyclone as usual would have gone towards Bangladesh.