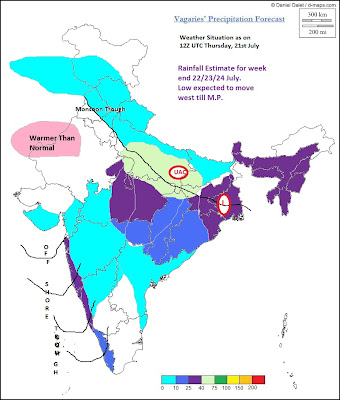 click HERE for larger map
Low, (not giving it a nomenclature), formed on land over West Bengal, is extending up to 850 hpa level over the same area.
Expect it to move west and fizzle out over M.P.around 23rd. Rainfall along its track is shown in the weekend Vagaries map.
A slight increase in rainfall along the Konkan and Karnataka coast could be expected at the weekend. It must be remembered, that its a temporary boost, and rainfall can decrease after Monday.
Since this low has an associated upper air circulation, there are even chances of an upper air circulation from this low continuing and moving west after Sunday into Gujarat and later into the Sindh coast, albeit as a very weak circulation. Needs to be observed on day to day basis.

Thursday was almost dry with a few shaowers. Rainfall measured in the day was 5 mms, with sunny intervals.

Friday will be partly cloudy, with a few showers. Rainfall on the increase from night. Rain amount 15 mms.

Partly cloudy to sunny, with light drizzle in some areas.

Rajesh, you have mentioned the Low to steer in the W - SW direction in your 'Flash Snippet', that would be a bit 'out of character' path for the Low isn't it? Typically we have seen these LOWs to take a W - NW direction. What is dragging it in the SW direction?

when the bay will host a monsoon depression?

NT.There is no drag in the SW direction. Its just a very temp.shift i noticed towards w/sw. Should move west again. and, i mention NGP as target as i see more clouding in the southern segment of low. BTW its heavy rain in NGP since 2 pm.
Shitij: Personally do not see a depression soon. MJO supressed conditions ahead.

Rajesh, the IMD in it's current bulletin has announced that the Low has concentrated into a Depression. Looks like it's longevity has now increased and could induce more rains around the North Konkan region.

Yes Rajesh, its raining since morining, sometimes heavily. Good for the Lake situations and farmers. Also the temperatures have dropped.