On Monday, heavy rains have been reported from almost all the regions of Saurashtra and some places in central/south Konkan.
W.D. has brought precipitation to Jammu region and H.P. Also Northern Pakistan faced the W.D. with 129 mms in Islamabad on Monday. System moving East.
Reason best explained thru the vagaries map below.
Comparing yesterday's map, the 850 UAC has moved south-west, and the 700 UAC also south-westwards.Yes, these can move SW, as the upper air trough runs along about the 21N line. 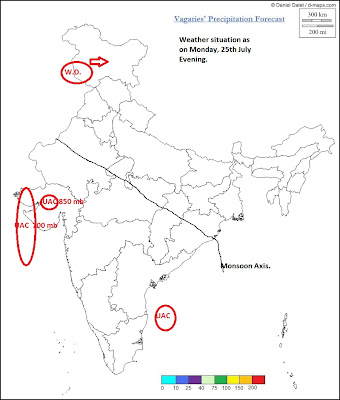 Rainfall has pushed into the Sindh coast on Monday. On the basis of the vagaries map put up, i think south Pakistan coastline can receive rains on Tuesday as well.
Karachi may get rains upto Wednesday it seems.
Moisture from the UAC will continue to precipitate rains in Saurashtra, and since there is almost an overlap to 2 turbulences, the region could get thunder showers.
Bharuch could be cloudy, with a few showers on Tuesday.
Expect precipitation in Vid. on Tuesday/Wednesday.
Nagpur can expect cloudy weather with few showers on these days.

received a couple of sudden downpours in the late afternoon. Showers were not widespread but in some parts of Mumbai. Colaba measured 74 mms till 8.30 pm while S,Cruz recorded 5 mms.

Tuesday: Partly cloudy, with a few heavy showers in some areas. Sunny intervals will make it reach 31c in the day. Rain amount 20-25 mms.

Its getting pretty interesting - the developments.

Rajesh can you tell me on which weather map I can see the upper air trough which runs along the 21N line as mentioned in your blog?

Looking at the satelite image of today morning it looks to me that a line of Thunderstorms will form from South Gujarat / North Konkan to the Central AP Coast. Once can see a diagonal line of CB Clouds connecting these two regions. An odd Thundershower may creep into Mumbai as well around late afternoon / evening. Completely my assessment - the above, considering my knowledge of these things (as compared to an expert like Rajesh) my forecasts can only be as good as the IMD