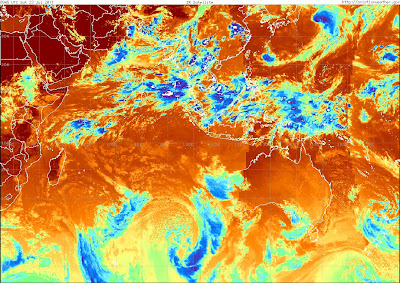 But, the associated precipitating clouding has moved westwards even faster. Morning we noticed thick clouding over Western M.P. and approaching Eastern regions of Gujarat. Presently, at 4 pm, we see the mass of clouds having slid into the Saurashtra peninsula, and having thinned out in eastern Gujarat. Current intensity of rain has decreased since the morning observations.(BB4 going weaker).
For Bharuch, light rain showers remainder of today, reducing by night.
Infact, at this rate, I see much of Gujarat rainfall decreasing by Sunday evening. And, the rainfall, though weak, creeping into Sindh coast a day earlier. By Sunday evening Karachi should get its anticipated (light) showers.
Signs of West coast off shore trough getting weak ! MJO effect ??
By Rajesh at July 23, 2011

Thats good. a bit of dry would be welcome. its been all wet since i've returned!!

It raind very heavily in north westrn belgaum dharwad etc karnataka intensijy was so much that places like castlerock joida might received morethan 200 mm rain,