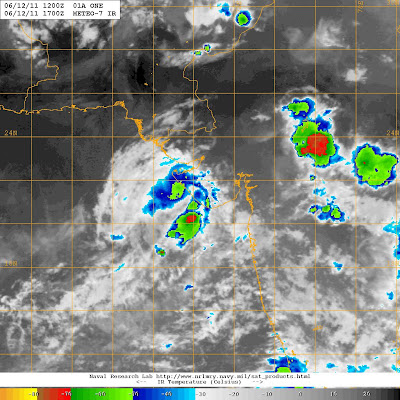 AS-1 has weakened considerably in the last 6 hrs. Sat image as on 10.30 IST Sunday. Pressure rises to 1004 mb, and winds at 25 knts. Just about a well maked low now. And having moved NW
Precipitation quantum has now reduced, with heavy rains restricted along the SW coast of Gujarat.
Mentioned yesterday about the J1 effect. That's it. AS-1 will weaken in the next 6 hrs, and move NW.
Clouding along eastern region of Sindh coast on Monday, with light to medium rainfall. Clouds will reach Karachi, by Monday/Tuesday, but rainfall ? Yes, a question mark. Maybe just around 5 mms. (Really, hope I go wrong for the citizens )!
J1 is precipitating rainfall in the northern regions of the sub-continent.
Good rainfall like 106 mms in Dharamshala, 38 mms in Mandi and 30 mms in Bhuntar (all H.P.) and 18 mms in Jammu and 12 mms in Simla was recorded. Various places in Kashmir received between 10-20 mms. Some rain was measured in Punjab too.
Across the border, J1 was active, and precipitated 52 mms in Gujranwala, 44 mms in Muree and 40 mms in Islamabad besides 10-20 mms in other cities in the North. 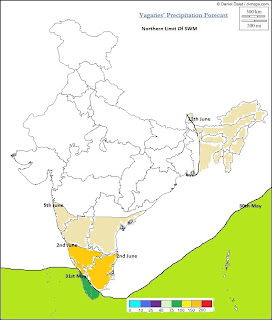 The above developments will keep the SWM stuck in the western sector in the current position , 20N along west coast, and inland as seen in vagaries map. Northern/Central India and Gujarat will have

to wait longer.
SWM could have moved into Gujarat, but the rainfall from AS1 was in the SW corner of Saurashtra,and South Gujarat and eastern parts were bereft of precipitation. See rain map.
But, BB1 is poised to intensify, and good graduate to a low soon. On happening, will move the SWM into Nepal and more regions of Bengal.
By Rajesh at June 12, 2011

Karnataka and Kerala also good rains.....they are not turning into desert. see the list

Seems the ECMWF and other models which showed bay system more active (duration wise) than the arabian one will be proved correct.

A WML will form near Orissa according to these models

Thanks Pradeep for the rainfall figures.I actually wait for them..every 10 days.and readers of vagaries will wait too !
Yes, I think the system in the bay, I give a nomenclature to make discussion easy, BB1 will prove to be something..interior regions of peninsula need rains soon...
sset, are you hearing,or rather eading ??


Rajesh, Pls be free to post the rainfall figures in your blog too.

I am surprised to see Cherrapuji so low in the list. with just 57 cm in 12 days.

India Agumbe which has a annual rainfall of above 800cm is also low with just 61 cm.

Maharashtra No.3 Gaganbawada which rocked last year has started with a good note. I predict it to finish no.1 ahead of Mahabaleshwar in Maharashtra

Kerala's dark horse Vadakara which rocked last year is the unusual leader with 82cm in 12 days.

Tamilnadu No.2 Devala is also in the top 5. Expect the No.1 Chinnakallar to catch up sooner.

is anyone here facing problem with the imd website...

Good work pradeep, great to see you have also started your personal blog :) @Ron Ecmwf exptecting bay low to move mostly westward eventualy toward Gujarat so very heavy rains might return by next weekend in Mumbai. But its too early to make exact prediction.

i can understand the low rainfall in cherrapunji as monsoon is not yet reached there but...

Till this year it has got only 307cm...thats is huge

@Pradeep.
Cherrapunji is very very much behind this year..and your comparison with last year shows a huge yawning gap.
What about Valparai ? Its too lagging and nowhere in sight ?
Agumbe will pick up later in the season i think.
In Mah. Gaganbavda will surely top, and M'Shwar is weak still. Pradeep, do you keep a check on Tamini?? Please try, I think it can also be a contender.
Please mail me ur, seems i have misplaced yours.
Thanks

to prove imd Pune data is wrong...i have published the march 2011 heavy rainfall in cherrapunji.

@svt- for that to happen that is to reach mumbai,shouldn't the low pressure form in westcentral bob...this looks like it will form in northwest bob...