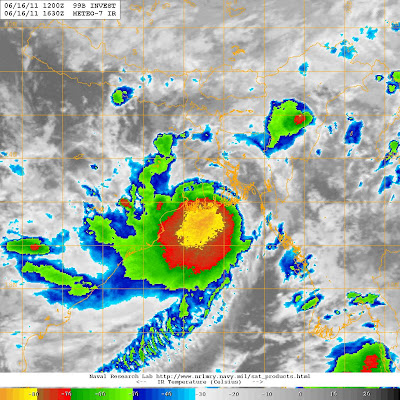 BB1 has moved North! Much against expectations and deepened into a deep depression, at 984 mb, and crossed the West Bengal coast. According to the NRL site, it lies centred at 22.1N and 88.8E. Exact location seems at the India/Bangladesh border, on the Gangetic delta.
SYSTEM WILL CROSS OVER KOLKATTA TONITE. Very heavy rains expected.
Its northward track has prevented the mass inflow of rain clouds onto the Konkan coast on Thursday. Some infow from the west was expected if the system would have crossed land near the Orissa/Bengal coast.
But due to a Northwards diversion, we see good winds and clouds flow towards the west coast all along upto south Mah.150 kms south of Mumbai as on Thursday 10 pm.
Mumbai's expectation of rain showers on Thursday was thwarted. In an average expected normal situation, on the system crossing the coast at 22N, a westerly rush towards the system should bring rains to Mumbai on Friday.

1.-Now that the full scene has shifted a bit North, I think a North/NW track would carry this system along into Bihar, Jharkhand and U.P. FInally, after a couple of days station itself in the Northern trough. Resultantly, SWM could push into Nepal and U.P. This, I fear, might create a "break Monsoon" condition for the central/Western and Southern regions. Maybe from as early as Monday 20th/Tuesday 21st.(Does that ring a bell ?? Like we discussed in yesterday's Vagaries ? Weak MJO ?)
OR,
2.- BB1 could move West/NW, and track along the Chattisgarh-North M.P. route. This, on the other hand, this could enhance rainfall in the central regions of India,west coast and push SWM into M.P. and Chattisgarh.
In either situation , remember, the clouding and rain is in the SOUTHERN QUADRANT of the system.
By Rajesh at June 16, 2011

For mumbai no problem, already it has received june share of rain(excess). Today we can see bit of sun after long rainy days.

Rajesh, in the current situation what is the forecast for Mumbai for tomorrow and the weekend?
Also, I agree with sset, the break Monsoon if it happens won't be so bad purely from Mumbai's point of view, enough rains for the month of June already.

i am worried about mumbai rains though..seems like it did not rain enough in the catchment areas...don't want a repeat of 2009...

This Low/Depression confirmed my worst fears, the least it can do now is bring some rains to Bihar , jharkhand and east UP.
when is the second monsoon LRF update from IMD ?

Ron has brought out correctly the lack of rain between two arms - western and eastern leaving a wide gap. Resultantly, vidarbha and marathwada have seen scanty rain so far..potey

@anath,NT,Ron,Cmgr,anonymous.
I personally still feel BB1 will track along the Northern trough, and most likely create a mini break monsoon.Say Tuesday ? Good or bad for Mumbai is an individual opinion.
I think next LRF from IMD is slated for end June.
As feared, IMD has now slid the off shore trough from Karnataka to Kerala. Outside the preview of coastal Mah.
Still have hopes for the rains in Mumbai from Friday, Thursday night S.Mum.had good showers. 18 mms at Colaba. Vagaries' projection was 40 mms !

What about Nagpur if this low moves North which it seems to be, then Nagpur wont get any rains till end of month? I am from Nagpur.

Thanks Pradeep. At least Thane was on target with 41 mms.

the next LRF is sometime near 21st June as per imd

according to kolkata airport metar from 11.20am to 12.20pm the pressure was 979hpa !!! also the radar showed that the center of the system passed bang on top of kolkata.
"http://imd.gov.in/section/dwr/img/Animation/dop_ani_main.htm"

@Rajesh Imd expecting BB1 to move west-northwestwards. Imd's Gfs even expecting sudden re-intesification of system when it reaches southern mp/northen maha around 23th july. Your take on this.

Thanks Pradeep.
Like I said, try to keep a check on Tamini too. It shows very heavy rainfall.
This heavy rain on thursday day and night, along with harnai with 17 cms and several other places in Goa and S.Konkan,shows the rainfall did not reach above S.Konkan. Vagaries was expecting rainfall to the tune of at least 80 mms in 2 days in N.Konkan.N movement of BB1 denied this.
Movement of BB1 from NE to NW of Kolkata as pointed out by a reader.
Putting up views on BB1 and Mumbai weekend tonite.