Snow in Upper Simla:
Simla hills woke up to fresh snow and sleet on republic morning. The town was covered with a thick layer of frost in the morning, as the low dipped to -0.1c, following mild snowfall and sleet last night.
Kufri,Fagu and Narkanda also witnessed mild snowfall.
The entire belt in Kinnaur, Lahaul and Spiti, Shimla and Chamba districts witnessed mild to moderate snowfall on Tuesday night. Keylong town experienced 4cms of fresh snowfall, where as 10 to 15 cms snow was reported in the Rohtang Pass (13050 ft).
Keylong in Lahaul and Spiti district was the coldest in the state with the minimum temperature at -13.7c, while it was -5.5c in Kalpa in Kinnaur district.
Canada Cold Wave dangerous !
Low temperatures of -30c is making eastern Canada shiver.
Temperatures have fallen so low that authorities are warning that condition 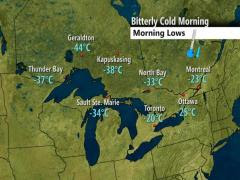 s may be life threatening.
When the wind-chill factor is added into the equation, temperatures felt as low as -40c, according to the Meteorological Service in Fredericton, New Brunswick. As little as 10 minutes out in the open could lead to lethal freezing, forecasters warned.
From Mark's Blog, a very interesting (and informative) video.
http://bcove.me/9briivgl or, if unable to open, see from Mark's Blog.
Cold pushes life to the extremes (Boston Globe):A balloon stuck with a sharp object does not pop; it deflates slowly. Hot water tossed in the air turns to steam; if any of it lands, it immediately turns to ice. Need a tack hammer? A banana will do the job.
Things change when it is minus -29c,. That was clear early yesterday in this Central Massachusetts town 35 miles northwest of Worcester.
With an overnight low of -30c, Athol was at ground-less-than-zero of the boreal blast that blew in from Canada. Cars left in the cold overnight sputtered. Exposed extremities started to freeze in seconds flat. Battery-operated cameras and global positioning systems died
TODAY'S WEATHER ACROSS SCOTLAND & UK
By Mark Vogan
By Rajesh at January 26, 2011

so first cyclone of the year expected in SE Bay ?? IMD-GFS prediction