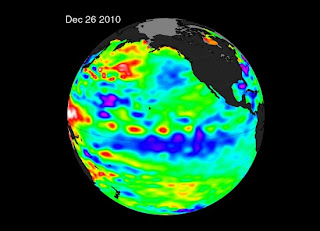 "The solid record of La Niña strength only goes back about 50 years and this latest event appears to be one of the strongest ones over this time period,” said Climatologist Bill Patzert of JPL. “It is already impacting weather and climate all around the planet.”

“Although exacerbated by precipitation from a tropical cyclone, rainfalls of historic proportion in eastern Queensland, Australia have led to levels of flooding usually only seen once in a century,” said David Adamec, Oceanographer at NASA’s Goddard Space Flight Center, Greenbelt, Md. “The copious rainfall is a direct result of La Niña’s effect."

I have two questions.
1.What would be the effect of this La Nina in rest of south Asia apart from the heavy rains in SriLanka which have been tied to this event? I think if this even last till the summer, then it might be a positive feedback for the Indian Monsoon as La Ninas are generally associated with stronger than normal Indian monsoon.
2.Why is this La Nina event called one of the strongest? According to NOAA, the most recent Oceanic Nino Index value(latest three months: Oct,Nov,Dec) is 1.4 C, which is the highest it has been for this current La Nina.Looking at all the La Ninas since 1949, there have been 5 La Ninas with lowest ONI value less than 1.4 C, one La Nina (the last one in 07-08) with the lowest ONI value equal to 1.4 C and 7 La Ninas with lowest ONI value more than 1.4 C.It seems that out of 13 La Ninas since 1949, five have been stronger than this one (as of december 2010).

All models are presently suggesting that the La Nina would peak by spring or near peak now.

Except the Japan Meteorological Agency (JMA) from the start predicted that the peak will be further down the year, affecting Northern winter and the residual effect will linger on till the
first quarter of 2012. My blog has been basing our assessment on the JMA forecast.

Either way, you are probably right - above normal rainfall this year too.

The La Nina is being speculated as probably the strongest on record because of SOI which recorded 27.1 in December. However, we can get a confirmation of this only after the event ceases.

a. Now, the Monster of a La Nina Confirmation??? 10/09
http://devconsultancygroup.blogspot.com/2010/10/now-monsterof-la-nina-confirmation.html

b. Strong La Nina: Bundle up, Monster Winter Ahead! 10/7
http://devconsultancygroup.blogspot.com/2010/10/we-had-in-one-of-our-june-postings-read.html

Neeraj,
All climate indicators of ENSO remain beyond La Niña thresholds. The tropical Pacific Ocean remains much cooler than average for this time of year, with temperatures below the surface up to 4 °C below normal in central and eastern parts (comparable to the La Niña event of 1988).
Neeraj, we also have to see all the regions Nino3,3.4 and4.
At present, trade winds are stronger than average.
Another factor, the SOI, which I always mention, value for December of +27, the highest December SOI value on record, as well as being the highest value for any month since November 1973.
Rajan, has explained it very well in his blog. I am a regular reader of Rajan’s blog, and strongly recommend reading.