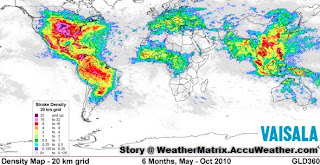 Vaisala, the original lightning detection company that I have profiled before, sent this map showing nearly 310 million lightning strikes on Earth (specifically 309,959,570, they tell me) in the last six months via their Global Lightning Dataset:
The map looks similar to those from NASA's satellite estimates, but because it's only 6 months of data, it doesn't line up perfectly, and these are ground-based, not satellite sensors.
By Rajesh at November 28, 2010

Rajesh, the image cannot be opened and in it's current form it's difficult to see it. I tried increasing the window size of my browser to 150% but yet it's very difficult to see the details