IT'S MID -DECEMBER & NORTH KONKAN WAS COOLER THAN MOST OF INTERIOR MAHARASHTRA  during past couple of days.. 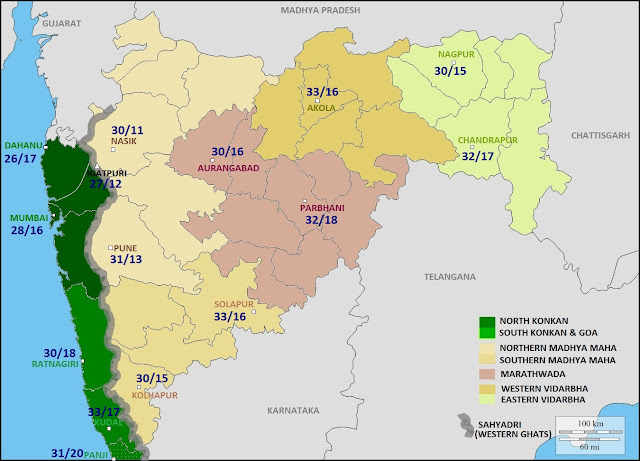 The Konkan coast will get warmer than Interior Maharashtra from tomorrow ..
By Rohit Aroskar at December 15, 2017

Today IS cloudy weather in mumbai.

After WD passage was expecting min to fall in Delhi around 6℃. But it never fell below 7℃.Don't know why.

Other side excess rains over konkan == I can see delightful flamingos coming over Airoli creek bridge over dense mangrove forest... (thanks for vagaries Mangrove article). By the way Mumbai has over 40 lakh trees (this is excluding biggest forest city - sanjay gandhi national park, aarey milk colony,mangroves). But if we consider Navi Mumbai or Thane green areas this will exceed crore trees already they are greenest cities. Sustained efforts by MAHA govt in tree plantation is great - 50 crore trees to be planted by next few years...

I doubt the number of trees to be 40 lakhs in mumbai. Over the years it has decreased with increasing population and infrastructure development. Yes navimumbai could have more trees as it is still expanding.

La Niña in the tropical Pacific

La Niña conditions continue in the tropical Pacific. However, the event is expected to be short-lived, and is likely to end in the southern autumn of 2018.

Latest sea surface temperature observations in the central and eastern tropical Pacific persist at La Niña levels (0.8 °C below average). Waters are also cool beneath the surface. While the Southern Oscillation Index (SOI) has eased in the few days, the SOI has been consistent with La Nina for several weeks. Cloudiness patterns across the Pacific region also show a clear La Niña signal.

In order for 2017–18 to be classed as a La Niña year, thresholds need to be exceeded for at least three months. Most climate models surveyed by the Bureau suggest this event is likely to last through the southern summer, and decay in the early southern autumn of 2018.

Next update expected on 3 January 2018