As any Vagarian will agree, I have always stressed the importance of the 200 mb Jet Streams....studying the Jet Streams, one can foresee a depression coming and even the track it can take later....

Depressions are one of the most significant weather systems affecting temperate latitudes. Surprisingly, and as Vagaries mentions to all its "readers/learners",  the origin of depressions is in the upper part of the troposphere even though the effects are felt at ground level. We look at the polar front's role in creating the upper westerlies and Rossby waves which set the scene for depression formation.
Depression begins when poleward moving warm air from the tropics meets equatorward moving cold air from the poles. The cold air from the poles is dense and forms a shallow atmospheric layer. In contrast, the warm air from the tropics is more buoyant and forms a fairly deep atmospheric layer. Where these two air masses meet (the polar front), there is a strong pressure gradient between the dense cold air and the less dense warm air.

At ground level, this pressure gradient drives winds from the polar air into the tropical air. This should create a northerly air stream, but the spin of the earth deflects winds to the right in the northern hemisphere so a polar northeasterly wind is formed instead. At the top of the troposphere (the lowest atmospheric layer where all weather forms), the pressure gradients are reversed.
Since the polar air is cold, dense and concentrated at ground level, there is little present in the upper troposphere so an even stronger pressure gradient exists in the opposite direction. At this height - far from the frictional drag of hills and mountains - very high windspeeds can develop. The pressure difference along the polar front therefore creates a region of high speed winds known as the upper westerlies.
The upper westerlies - and their embedded jet streams - form a series of huge meanders. In it are embedded "Divergence" and "Convergence"...Divergence being the original "Source" of a System. These help to create the depressions which form such a prominent part of  weather. The meanders vary in size and location but there are certain areas where they are very common.
Depression source areas
We can predict certain areas will be common "breeding grounds" for depressions from the following observations:
1.Depressions are triggered in locations where jet streams accelerate. Depressions can form slightly aligned to the core of the Jet Streams.
2.Jet streams accelerate when the Rossby wave meander heads back towards the polar regions
3. Locating and forecasting the Divergence in the Stream.
4. Checking the core region of the Jet stream for estimating the Location of the formation of a system. 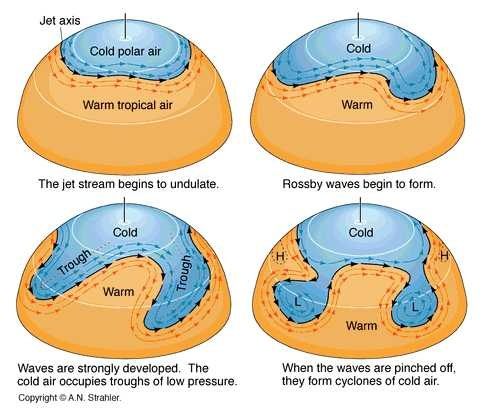 This meandering wavy pattern of the jet stream in the upper troposphere are known as Rossby waves (as shown in the second part of the picture ).
IMAGE
Now, proceeding to third and fourth picture, you will realise the invasion of some points by warmer latitudes below polar region by some cold pockets which will subsequently affect the weather of the region by causing extremities in local temperature. 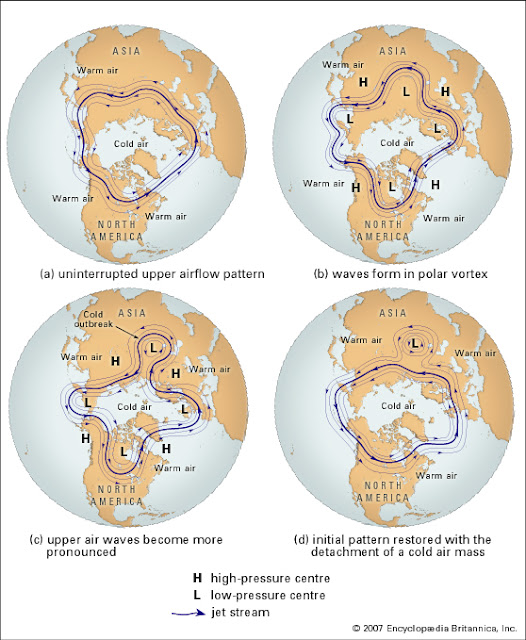 The air over a huge area of sea or land rises up to join the jet stream whilst air from thousands of square kilometres either side converges uneasily along "frontal" zones.
By contrast, areas of decelerating jet stream result in subsiding air creating high pressure at ground level (see below). 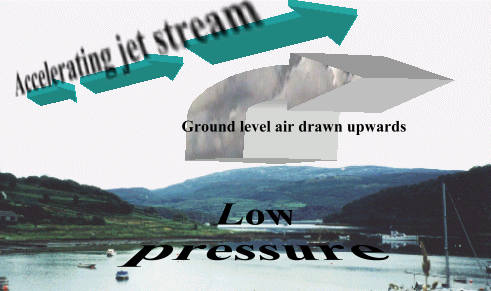 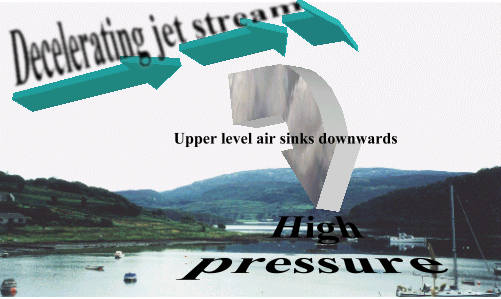 Due to the tendency of cold wind from poles to move towards equator and warm winds vice versa towards poles, they distort the path of the jet stream travelling in a straight line and cause them to move in a wave like pattern or meander at various intervals.

Forecast of Depression formation and its location can be estimated by you...just study the 200 level jet streams. Be less dependant on Weather Models.
End of Article..

Check the Latest Development in the Sub Continent Weather on Current Weather Page
By Rajesh at December 27, 2017

Awesome write up..Recall how you had stressed on 200 mb jet streams in every meet. Thank you.

An interesting discussion is worth comment. I think that you should write more on this topic, it might not be a taboo subject but generally people are not enough to speak on such topics. To the next. Cheers https://www.setupabudhabibusiness.com/