In Assam no signs of floods coming down with Gossaigaon recording 371 mm.
Bihar too in the foothills are getting heavy rains with Bahadurganj recording 324 mm, Taibpur 315 mm and Forbesganj 295 mm.( From PJ) 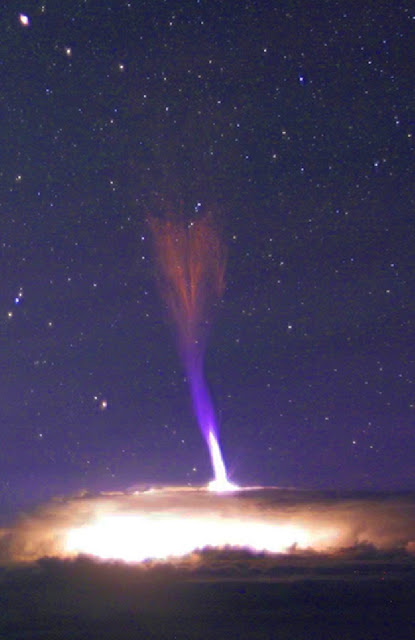 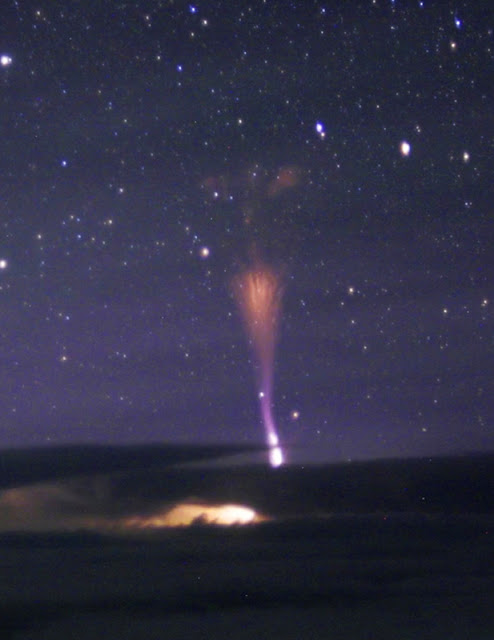 Sometimes called "space lightning," Gigantic Jets and their cousins the sprites are true space weather phenomena. They inhabit the upper atmosphere alongside auroras, meteors and noctilucent clouds. Some researchers believe they are linked to cosmic rays: subatomic particles from deep space striking the top of Earth's atmosphere produce secondary electrons that could, in turn, provide the spark for these upward bolts.

The link to cosmic rays is particularly interesting at this time. For the past two years, space weather balloons have observed a steady increase in deep space radiation penetrating our atmosphere. This increase is largely due to the decline in the solar cycle. Flagging solar wind pressure and weakening sunspot magnetic fields allow more cosmic rays into the inner solar system--a trend which is expected to continue for for years to come. These changes could add up to more Gigantic Jets in the future.
Article courtesy Spaceweather.com. Excerpts from spaceweather .com. More on this here.
By Rajesh at August 12, 2017

Quite common for august month, monsoon to go in break phase.
From vagaries historical blogs - 2016,2015 Rajesh sir has given good explanations

Not sure why we call break -it still rains NE,Himalayas - every state needs to receive rain and of-course thunders to water starved TN !

Some good early morning rains in mumbai and thane

Cosmic rays usually have radiation properties comprising of hydrogen and helium. Earth magnetic fields shield from these impacts. Solar flares also belong to these family. Lots of fiction has revolved around mysterious origin of cosmic rays due to stars explosion and earth life destruction.

Rain intensity has certainly increased. We are seeing good on and off showers again since evening.