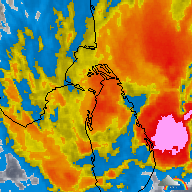 The low pressure off the Sri Lanka coast, 91B, is now at 7.8N and 82E, just on the eastern Coast of the island.
Most of the Sri Lanka's Eastern Coast and Central areas are getting light to medium rains today, Thursday. A heavy rainfall area is approaching Batticola as seen in the image (courtesy WunderMap), and could commence by tonite. Local flooding possible.
System will move South-westwards, and fizzle out in the next 48 hrs.
Little impact of light rains, to medium in pockets, on the Southernmost tip of the T.N. coast. Windy for a day in the region on Friday, though winds will not exceed 15 kts.
The on-coming W.D. has precipitated rains/snow in Pakistan on Thursday. Prominent rainfall and snow figures for the day were: Chitral 15 mms, Nokkundi (Sindh) 11 mms and several stations between 2 -7 mms. Still feel that the odd rainfall may pop up along the Sindh coast on Friday.
Nepal forecast is maitined. Rains/snow from Monday in the west and on Tuesday in Kathmandu.
Moving into India, and showering light flakes in Kashmir and H.P.on Thursday, the precipitation areas will gradually spread as mentioned yesterday.(For todays precipitation check rain accumulation image in the links).
Remember, the system is expected to anchor in the region for 5 days, showering rain and snow. Hence snow accumulation possible in Kashmir and H.P.
Resultantly, temperatures will fall next week in the India/Pakistan region.

Unimanigable and unprecedented rise in the city temperature !

And, became the hottest place in on the 3rd. of February !!