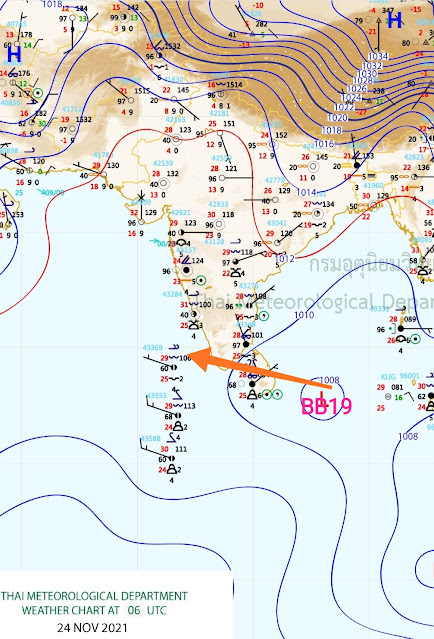 The weak system BB 19 is expected to move West and cross into the Arabian Sea.

This can bring precipitation to  Konkan, Goa, Madhya Maharashtra  next week. More on this later.

Mumbai & Pune will get dry and warm weather this weekend..25th thru 28th. No chances  of getting a major shift to cooler temperatures.

Rain expected  again next week . Will track the system and quantify  later.

end of November or start of December.

A low pressure system BB -20, is expected to enter Andaman Sea from Gulf of Thailand around 29th November. This system B- 20, remains under observation for any significant development.

You have asked to explain these,as you call, weather  changes in Mumbai.

Let me tell you ,in my 55 years of Mumbai  weather  observations, I have extremes  such as

Many more in Extreme Blog.

Yes,for  sure,there is a change  due to urbanization.

Changes  are restricted to urban islands.

Accept these variations,they are everywhere and cyclic.

If in doubt, ask.

It may be unusual,but has happened before.
People's memory is short!

Thank you Rajesh sir for your detailed reply. I was not knowing that.
Agreed that such extreme may happen once a while but my question was is there gradual change in Mumbai climate?
Earlier days rain used to start in early june, Diwali used to be cooler followed by winter till Holi. Summer was not so extreme though humid.
But last few years specially 2021 cold was shorter due to January rains. Heat started in mid February, mid may cyclone and delayed rain. Fortunately monsoon was good. Now November humid warm weather with rain.
Does it indicates weather change in Mumbai? Or this is one of those extreme years.
Even Maharashtra interior experience more rain than earlier years?

Sir,
When we were kids we use to see cool night temperatures after diwali.we use to do camp fire at night during december. May be city was small and more open spaces less vehicles and more trees at that time in suburbs were the reason to feel cool..Now it's all concrete..