Summary
Below normal rainfall is most likely during the 2017 OND Season over some parts of SE Peninsular India, north Sri Lanka and some northeastern areas of the region. Above normal is most likely over southeastern part of the region and along the coastal areas adjacent to the north Bay of Bengal. Over remaining areas of the region including northwest and central areas that generally receive
very little rain during the season, rainfall is most likely to be Normal.
Normal to slightly above normal temperatures are likely during the 2017 OND Season over most parts of the region.
Currently cool neutral ENSO conditions prevail in the Pacific Ocean and these conditions are likely to continue and turn to border line/ weak La Nina conditions in the early next year. It is also recognized that during the 2017 OND season, in the absence of SST forcings from Pacific and Indian oceans, strong
intra seasonal features will have larger influence on the climate variability over
the region leading to increased uncertainty in predictions of seasonally averaged rainfall and temperature patterns.
The consensus forecast outlook presented here has been developed
through an expert assessment of the prevailing global climate conditions and forecasts from different climate models from around the world.
For more information and further updates on the northeast monsoon
outlook on national scale, the respective National Meteorological and
Hydrological Services (NMHSs) may be consulted.
A separate consensus statement for the winter season (December 2017 to
February 2018) will be issued in November 2017. 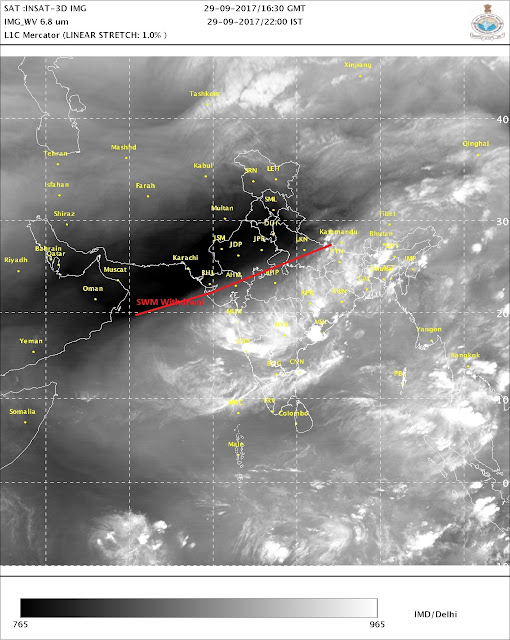 Email ThisBlogThis!Share to TwitterShare to FacebookShare to Pinterest
Labels: NEM 2017

Does this mean drought for SE India (TN, south AP[Rayalseema,Anantapur,Chittor,Cuddaph], SE KAR) and of course Sri Lanka? This will be 3rd drought year. NEM -Non Existent Monsoon. Whatever thunders received during SWM is just meager amount.

Rise in water levels in reservoirs across the country

Rains are predicted in mumbai during the second week of oct . May be because of some cyclone formation in oct close to mumbai.
Could be one of the reason .

Banglore just missed ATR of September, still a bountiful September for us. While I am typing, it is raining outside..