The Low from the Bay has embedded itself in the Northern Trough. The trough has gained prominence.
SWM would resultantly push Westwards from Bengal /Bihar region into UP and MP and Eastern Vidharbha..
By Sunday, showers will be creeping upto Delhi NCR and Haryana. Inter action with a Northern WD will bring rains to Kashmir and adjoining North Pakistan.
Delhi NCR can expect a thunder storm, could be rather severe, by Sunday..

Islamabad will be hot, 39/40c on Friday, but seeing the WD give some gusty thunder storm on Saturday/Sunday.
Karachi: Hot at 36/37c, but very warm nights at 30c as minimum. West winds and clear skies. Expect some clouding from Monday.

No major revival seen along the West Coast of India. The nominal 20-30 mms in places would continue, but no big surge is expected this weekend.
In fact, the interior regions of the Peninsula will get very scanty rains.

Mumbai: Rather cloudy with brief duration showers in parts of the city. Showers around in the vicinity on Saturday may produce around 15 mms, but Sunday may not get that lucky, and may end up with less than 12 mms.

Pune: Rather warm and humid, as day will be cloudy to some extent. A few passing light showers in parts of Pune. Rain amount upto 5 mms/day. 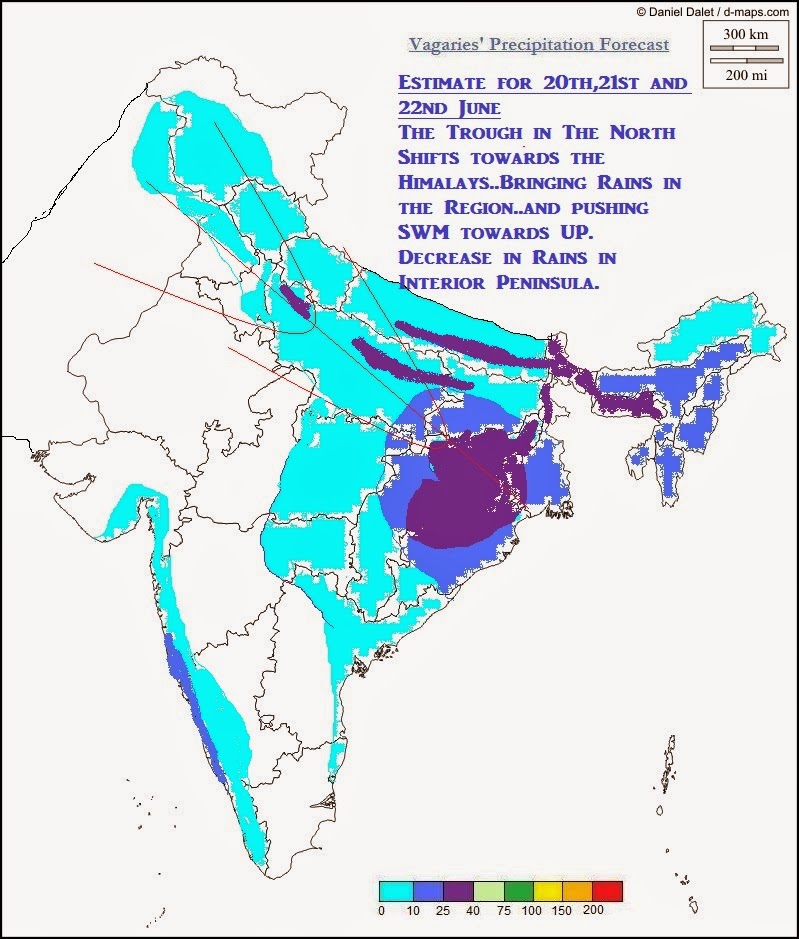 What wud be weather in matheran for weekend.

Terrible disastrous monsoon of 2014--The BOB System will produce more rain's towards northeastern states, and once it's done almost entire India will be under 'Deficient Zone' for the month of June.

Arabian sea wing of S-W monsoon may go lull after 24-Jun , that means very less rain for mumbai and central maharashtra atleast next 1 or 2 week ,.....WHAT'S UR VIEW ON THIS RAJESHJI..

As I said earlier there is no way Mumbai will get normal june rains unless magically some system pops by the end of month. Forecast till 26th is grim.

Yes , me too 'Im praying' that some system pop's up before this month end's, like yesterday in Vasai there was all of a sudden very heavy downpour for 10 min's such downpour's should continue for hour's together,that's what the entire west coast is famous for, extreme rain's in the monsoon season. , really missing those rain's.