Yes, the rains have picked up, marginally as expected, on Monday Night...very marginal  in fact...Light to moderate showers in parts of Mumbai saw up to only 2 -3 mms overnight...
And Tuesday, the momentum was very sluggish...Good showers are reported from Ghat sections, with Lonaval seeing 13 mms on Tuesday afternoon. Abhijit from Badlapur measured 27 mms in his personal rain guage (un official)...while Mumbai saw some localised rains measuring 2.4 mms at Vagaries in the morning...Mahableshwar saw 9 mms and Bhira 16 mms on Tuesday till evening...
The Rains are seen picking up along the West Coast, specially off Goa and Karnataka coast..
More expected on Wednesday...

Our Usual Vagaries Monsoon Analysis and stats from Vagarian GSB will be up tonite on this Page at 11.30 pm IST...Good to have you back GSB.. 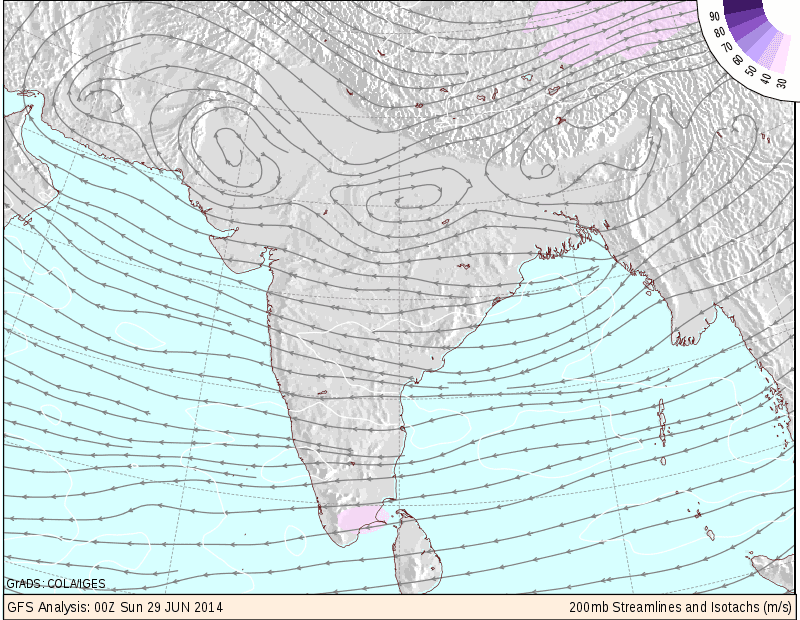 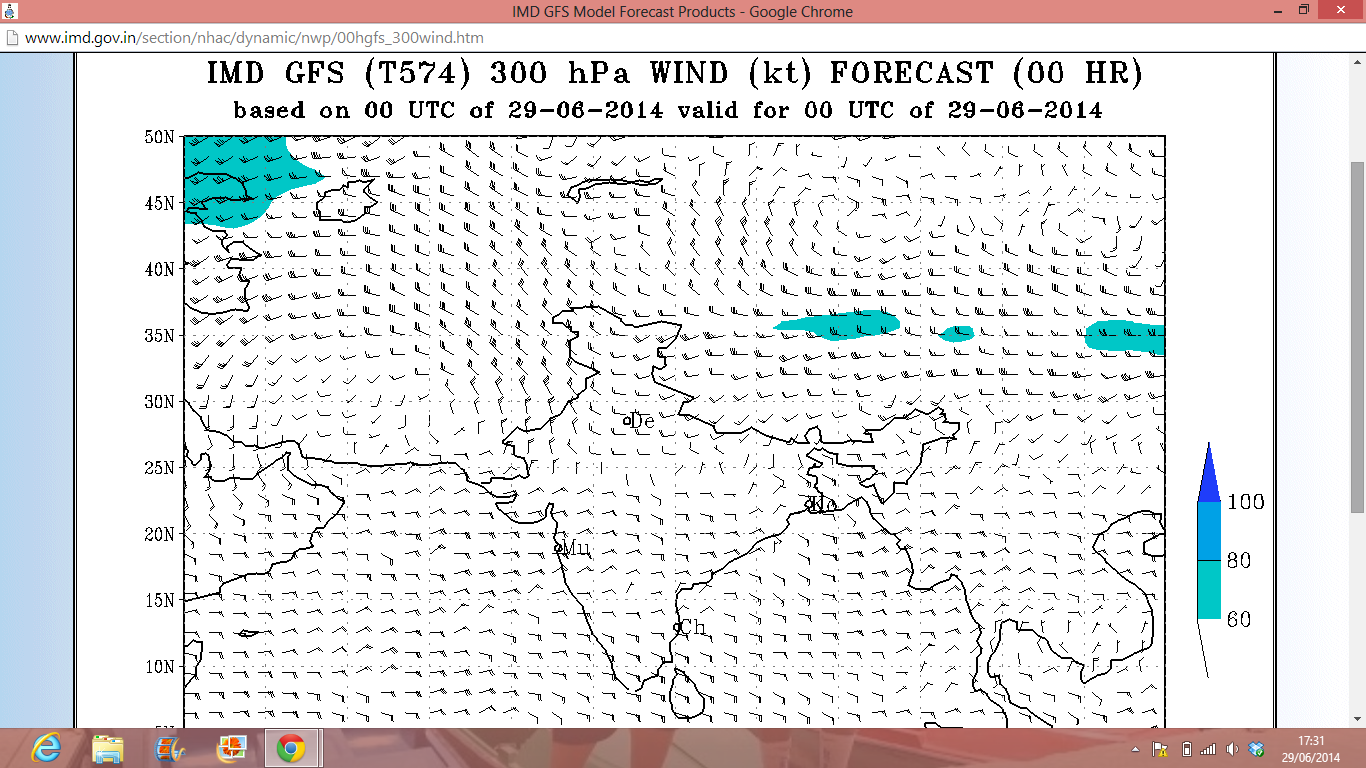 And the expected normal jet stream position for the season 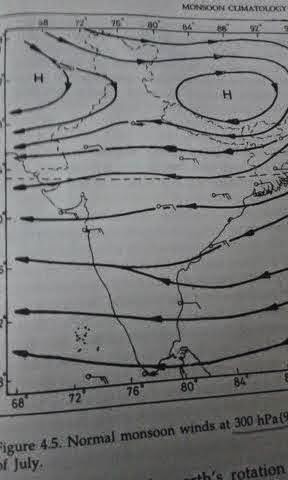 Will restore to this normal position with a high over Tibet by next 3/4 days.

1. The South West Monsoon is expected to move into Delhi. UP, Uttarakhand and Punjab and parts of MP in the next 3 days.
We say that the showers currently received in Punjab and Delhi NCR are pre monsoon. The current parameter we study s the 200/300 level jet streams. These are taken into consideration today as they will be guiding the Monsoon towards the West, while the sea level trough remains North of normal position.See Charts above...

Delhi NCR will get the thunder showers next 3 days, and would expect Monsoon by Thursday. SW winds will dominate. Cloudy and cooler conditions by then.
Heavy falls in Punjab and Haryana and west UP.
Very heavy rains expected in Uttarakhand next 3 days. Caution against flash floods.

The Northern Axis will remain for the next 3 days in the present position, therby bringing down the UAC over W. Bengal to sea level. The Low will be most probably situated over Bangladesh.
Kolkata and most of G. West Bengal can expect heavy rains on Monday 30th/ Tuesday 1st July and Wednesday 2nd July. Would expect between 35-45 mms/day in Kolkata on Monday and Tuesday. NE States can get very heavy rains from this coming week as the anti clockwise winds from the Low rush straight into the region. Expect extremely heavy falls in Meghalaya.

As the Low moves Eastwards, Rainfall decreases in MP and Odisha. We see a decrease in rains as compared to last few days in Odisha ( BBS) and East MP regions.

2. The feeble off shore trough from Karnataka to Kerala is hosting a UAC off Karnataka. Increase in rains over coastal Karnataka and Kerala next 2/3 days.
South Interior Karnataka and adjoining TN would get some showers.
Bangalore could see cloudy weather, and some showers of moderate intensity in the day for the next 3 days, Monday could see a thunder shower in some parts. The upper air trough along 12N weakens after Monday. Tuesday and Wednesday will be cloudy ( 31c) and some showers in parts.

Rainfall marginally picking up over coastal Maharashtra from Monday 30th. The Konkan region will see some improved rainfall from Monday thru Wednesday 2nd July, though not up to the mark required.
Interior Maharashtra and Gujarat would remain devoid of any meaningful rains.

The trough in South India along the 12N line and the UAC off the Chennai coast seems to weaken by Tuesday 1st July. Another day of rains in Chennai and subsequently may decrease from Tuesday. 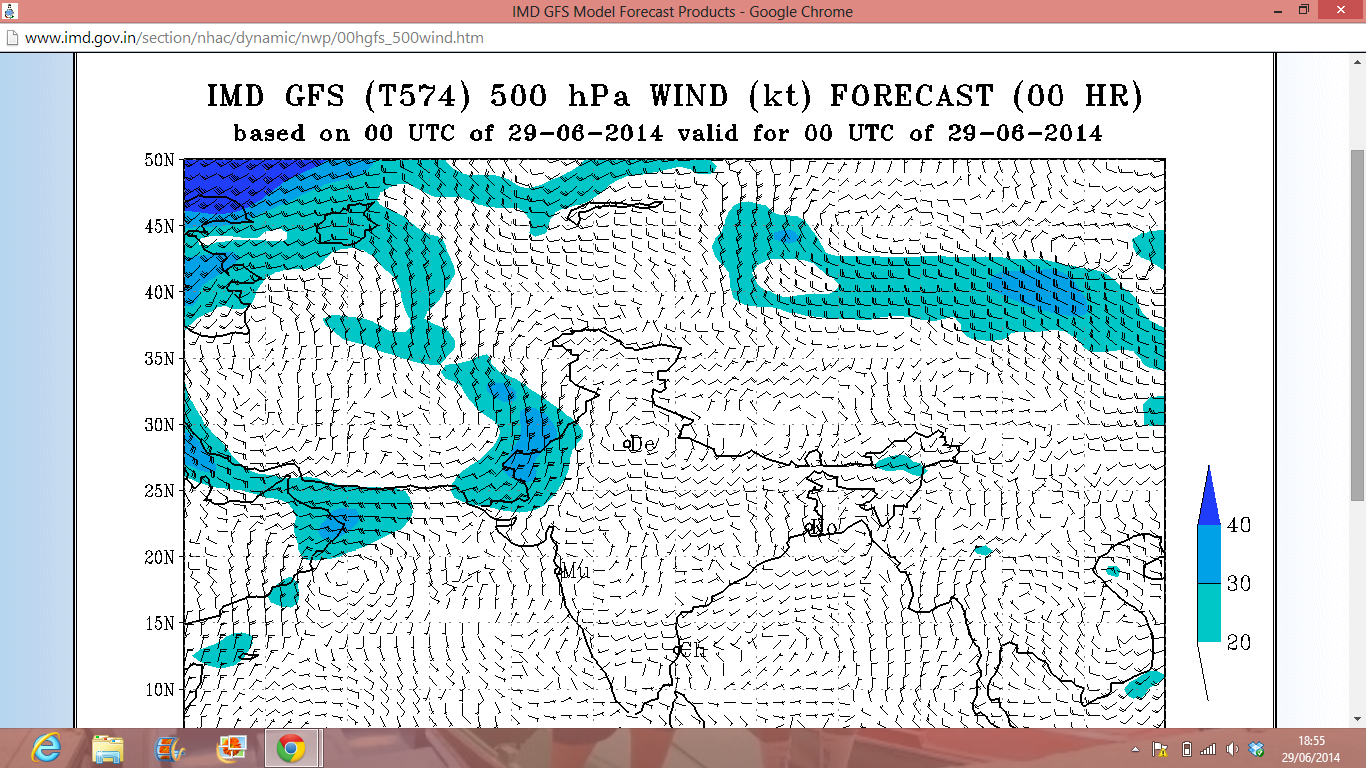 Mumbai forecast and report was put up yesterday...Yes, seems Colaba heading for its driest June EVER....and rains seem to show a slight improvement from the coming week..more so from Wednesday as declared earlier. A fresh June report tomorrow nigh for Mumbai and Maharshtra...

The South West Monsoon can be expected to move into Northern areas of Pakistan initially within next 3 days.
Next 2/3 days, we can expect thunder showers in Upper Punjab ( Lahore and Rawalpindi), Islamabad, and extreme Northern Pakistan regions as the seasonal low is focused in the far North of the country, and SW winds from the Arabian Sea are blowing towards the Low.

Coastal areas of Sindh and Karachi will be cloudy with light rains in the next 2/3 days.
Monsoon arrival for Sindh seems to be delayed to some extent.
Central and Upper Sindh will be hot, with places in Balochistan and Sindh reaching 48c.
By Rajesh at June 29, 2014

Hello Rajesh Sir,
As per blog interior maharashtra will be devoid of rains till thursday. When can we expect rain to pick up in these areas? Will rains starts increasing in ghat sections like Lonaval,Mahabaleshwar along with costal line for Monday?

Thank you for the update.

Maharastra seems to be on the brink of unprecendented drought.Wonder if we will have enough water for drinking purpose leave alone for irrigation.

Rajesh Sir,
What is forecast for N.I Karnataka, Telangana, Rayalseema. No meaningful rains received in these regions so far.

God mumbai did not receive any rain till now when will it start raining it has turned so hot and humid!! Hope the rains arrive on 2nd

Raining in Borivali, Kandivali and Thane as on Monday night...light to medium..

Medium shower here in South Mumbai at 9.15 am.. Shall inform recorded amount

There was heavy rain at Juhu around 2:00 AM, not sure how long it lasted though as I drifted back to sleep soon

There was a brief heavy shower in Vasai at 5.am.

Sir when are we mumbai peoples going to enjoy the thundershowers.this heat is unbareable nw it feel like the summer season has not ended yet in mumbai this time.this time the monsoon is very bad in mumbai as no meaningful rain or the typical june,july weather seen where we cant see the sun for several day this time the senario is so different.sir when can we expect that june ,july rains in mumbai

I feel Mumbai should get good rain's from tonite

Was expecting a better pick up of rains from Monday night for Mumbai...not this 2/3 mms...Though we did get good showers in the Eastern townships and ghats..
Wednesday should be better, with thunder showers next 48 hrs...

Panvel has recorded 1mm from 8:30 am today till now. (my rain gauge)

when monsoon will enter in upper and central sindh, pk

Tariq: As forecasted, karachi is getting light rains on Tuesday. We expect light rains in coastal sindh next 2 days. But Sindh and upper Sindh may get squally weather which also was mentioned in vagaries.
Actual monsoon will be arriving in Sindh after 10-12 days, with some thunder squalls from next week.