However, a cyclonic circulation in the Arabian Sea is likely to push moisture northwards towards north Konkan and up to south Gujarat on 16th/17th/18th October.

Mumbai, Navi Mumbai, Thane also have a chance to witness rain/thundershowers on 17th/18th. Monsoon will be over after 20th.

Monsoon was on track to withdraw from Mumbai and neighbouring regions by 17th/18th.  (Weather vagaries and Nature is forcing us to make frequent changes😡)

Pune city and outskirts can also receive thundershowers on 17th/18th.

Parts of Vidarbha (Akola, Amravati) districts can also get some rain from 16th-18th October.

Along with a trough like feature in easterlies at 850 hPa, this can trigger rain/thundershowers across parts of South Gujarat (Valsad/Navsari, although chance is less). 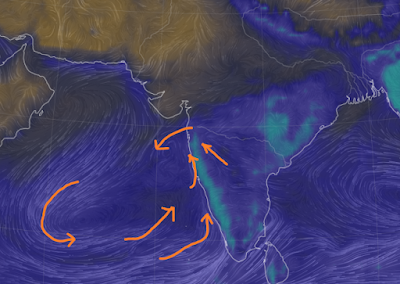 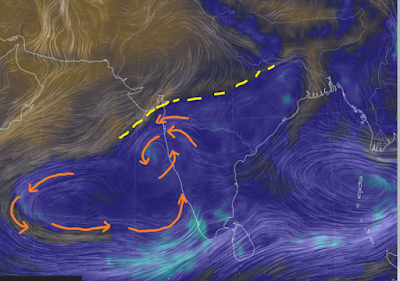 Bay of Bengal  witness frequent cyclonic circulations as  easterly Waves, normally anytime after 15th October. This is precursor of onset of Northeast Monsoon.

We expect a Low to emerge in the Bay around 17th...and feel North East Monsoon will resultantly set in around 21st...Simultaneous to SWM withdrawal.