Only 4 days remaining for December Entries...please fill in your contest entries before 15th December...


D-2, now over the Northern Indian region is moving away eastwards. The anti cyclone over central India has moved SE , and by tomorrow would be over the AP coastline. 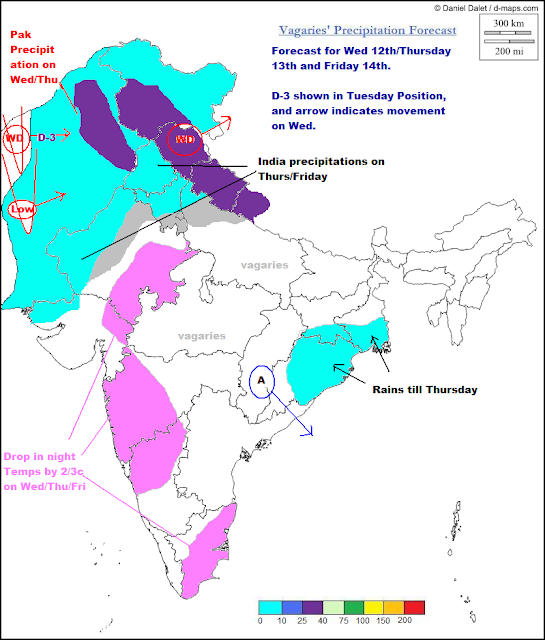 Wednesday 12th:
It is expected that major precipitation ( from D-2) in the Punjab, Haryana and West UP region will cease from Tuesday night, and mild snow/rain continues in HP, Kashmir and Western Utteranchal and Western Nepal till Thursday.
The Southern gangetic W.Bengal region, Orissa and adjoining Jharkahnd continues to get rain or thundershowers in isolated pockets.
On Wednesday, Kolkata can expect the rains/thundershower in some parts of city, a hit and miss chance, to continue till Thursday. High temperatures as far as night temperatures are concerned.

D-3, the next in line, is seen on Tuesday as a trough South of the Caspian Sea.
The WD, as it moves eastwards, will host an induced low over the Balochistan/upper Sindh region on Wednesday.
As it approaches the Pakistan region, Wednesday sees precipitation in Balochistan and upper Sindh. Northern Pakistan gets snow on Wednesday.
Karachi will also get cloudy weather and light showers from Wednesday evening into Thursday.

Thursday 13th: Heavier rains, with some heavy showers in the Islamabad-Lahore belt.
Rains spreading to India in Kashmir, HP, Punjab and N. Haryana. Snow bountiful in Kashmir and HP. along the SW line, some light rains expected in Rajasthan and adjoining Kutch.
Western Nepal gets a dose of snow/rains.
D-3 may not have effect on Delhi NCR in precipitations. Only cloudy weather.

Friday 14th: Heavy precipitation in the hill states. Western Nepal too gets a continuation of snow/rains.

Mumbai: Wed/Thursday/Friday will have partly cloudy nights with low clouds. Nights will be dropping by 2c to around 15/16c(Scruz) and days around 28/29c.

Pune: Clear with fall in night temperatures. Nights will be around 10c. next 2 nights and could drop to 9c on Thursday.
By Rajesh at December 11, 2012

Here, the past six days have been a bit warmer than expected. esp the minimums have gone up.I suppose, rain is not yet in the cards.

Due to dense fog and low clouds no drops
in min temp today here in Badlapur. So min
temp continues to be 17 C today also same
like yesterday.

It's 8 AM now. Still no SUN seen yet due to
due to dense fog . And also poor light here.

Temp was 19 C at 8.30am here in Badlapur due to dense fog not much rise in temp until yet as sun still yet not seen.

abhijit: The low clouds over the city has formed the fog and settled on ground...when forecast was put up last nite, i should have anticipated this event..something to learn.

Neeraj:Yesterday was 5.8c, but today (wed) dropped to 3.8c..anyway, very little rain is normally seen in Kathmandu this month..cooing effect from D-3 is possible..with a stray shower

it was a beautiful sight today morning at 4.30 AM Apta Station - station master was flagging runthrough of train with fog flooding into building. Surprised to find Panvel was devoid of fog when I reached at 0515

@ emkay. Yourself not in Vagaries FB know ! Then please join Vagaries FB group for all weather action live . Junaid also now active on Vagaries FB. And today morning Badlapur to Karjat through out 30kms railway line stretch was having dense fog and visibility was less than 100 meters. And local trains were 30mins late here in morning time & Sun was seen only after 9am here . Mine fog snaps over Badlapur also posted on Vagaries FB group.

@Abhijit i am there viewing all that and get all ur posts from FB into my mail.