See Inter Active Page for Some Pics from California...

Sunday 29th thru Tuesday 1st May, moderate* rains in HP and Utteranchal from the "last leg" of A-5, which moves away by Tuesday into Weastern most Nepal.
West Nepal gets some precipitation too on Sunday thru Tuesday.

Decrease in rains in North India from Tuesday, 1st May. Substantial rise in
Heat from Thursday, 3rd May. Heat regions will cover Haryana, Delhi, West UP, Rajasthan, Gujarat, Vidarbha, North and Coastal AP. Friday, 4th and Saturday 5th will see temperatures rise to 3-5c above normal.

Some light* rains in Chennai on Sunday and Monday, passing showers maybe, then decreased minimal rainfall in the South till Saturday, 4th May. Some light rains on Friday thru Sunday, 6th May in Kerala and interior TN.

Medium* rains in Bangladesh and Meghalaya on Mon thru Wednesday, adjoining W.Bengal to receive medium rains with Kolkata getting showers on Tuesday and Wednesday. 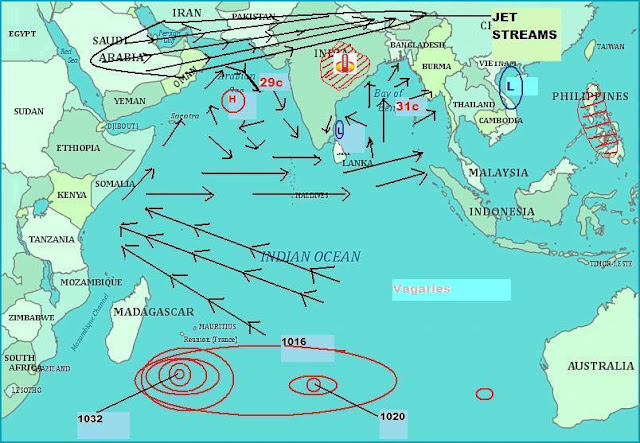 Refer to this Vagaries' Map and Read the Explanation below:


1. Bay Low:  Indicator: +ve
"Bay of Bengal" low pressure parameter is no longer a worrying factor. Normally, the Bay hosts a pre-Monsoon low anytime after 15th. April. Like I mentioned in the previous MW, in 2010 we had a cyclone in the Bay by the third week, and in 2009 a cyclone crossed the Bay on 12th April.
We have had a B-1 now !


As on today, this region still maintains a good prospect to the formation of another quick low. The winds indicate a weak low trying to establish itself.
Also +ve sign of a quick formation is that the SST is conducive. Map shows around 31c near the Andaman Islands. Ideal temperature for quick low formation.
A pulse from the far east is possible in the next 15 days.


A heat spell in the Phillipines could create the necassary conditions for a depression or a TS there. A report from the "Manilla Bulletin", a leading Newspaper,: "This month, PAGASA said the expected ranges of temperature in the country are: 22°C to 36°C in the lowlands of Luzon, 16°C to 26°C in the mountainous areas of Luzon, 23°C to 34°C for Visayas, 22°C to 34°C in the lowlands of Mindanao, and 18°C to 32°C in the mountains of Mindanao.The highest recorded temperature in Metro Manila so far this year is 35.9 degrees Celsius, and the highest in the country is 38.4 degrees Celsius registered at Clark in Subic, Pampanga.
As temperatures continue to soar, the Quezon City Health Department (QCHD) advised residents to take precautions against most common dry-season diseases and heat-related illnesses".


The region below the equator in the Bay sector continues to be favourable with SE winds tending to bend SW South of the Bay in the 95E region.
Remember, the normal date for SWM to hit the South Andaman Sea is 15th. May.


The line of wind dis-continuity should shift back to its normal postion, in the centre of the Southern Peninsula region.
More out breaks of pre- monsoon thundershowers are expected normally in the southern states and South Maharashtra. We are having these now in the South thanks to the B-1 effect. Though the showers in the South are heavier than normal, and excessive. But, a break in the pre-monsoon thundershowers is common, and will allow the days to get hotter.


An exception this year is the Vidharbha region. the temperatures are managing around 42/43c. Normally Vidarbha is a hotbed ! 45-47c is a "kid's playground" for the region in May. But, the minimums in the region are still wanting of the 30s.
Nights in 2010 were terrible at this time. See in this link, April 13th and April 20th.2010
And compare and contrast this with the all India lows this year.

The sesonal low in the Thar region is also lagging behind, thanks to the absence of intense heat waves, and pushing WDs in the lower plains of NW sub continent.
The days, have not yet started to rise. Trends of rising temperatures are not yet satisfactory in Gujarat and NW India and adjoining regions of Sindh across the border.
We have yet to see a 45c !


True, the entire sub-continent region has to suffer a heat wave, but the gains are much more.
The pressure around the Thar desert region is now 1002mb (994mb required by June begining). There is no central core formed as yet. And, as per the required scheduled development, a proper gradiant is behind schedule in the making.


The cross equatorial wind flow, has just about picked up in the Southern Hemisphere. Winds, have not yet achieved the required speeds, but just about started hitting the East African coast. Proper re-curving as SW winds, off the Kenyan coast, is yet to occur. However, Cross winds in the Eastern Sector (Bay) are getting strong, and are re-curving.


Mascarene High pressure region, the back-bone of our Summer Monsoon, is also slow to form down in the Southern Hemisphere, off the Madagascar Island, and in the mid South Indian ocean.


Amidst this, no cyclones are likely to form off Australia this season.  If no low pressure forms there till end of April, the ITCZ can start moving North. And with low pressure trough riding a weak MJO wave, and ITCZ moving North, the "High" in the Southern Indian Ocean has a fair chance of getting stronger and anchoring well.
As the ITCZ tracks north, associated MJO waves can "ride" alongwith. Meaning, after the shift, more MJO waves in the Northern Hemosphere (read Bay regions).


The positive news from Australian Weather Bureau; "This greatly reduces the chances for northern Australia to experience any more monsoonal activity this season. The next significant burst of monsoon activity is unlikely until the 2012-13 wet season commences."


If, by any chance, there is a further increase in SST in May/June, it would mean less than normal rains in June/July.


200 hpa Jet Streams are still dominating the upper half of the sub-continent. Though below the 8N line the jets have shown an Easterly curve, it has to re curve, and form a "low" in Central India by end April, to be on schedule. The prevailing westerly jets in the North are encouraging the W.D.s


Conclusion: As of today, there seems to be a slight delay in the Arabian Sea branch of the Monsoon. And, the Bay branch needs a little trigger to get going. Maybe a little less rain in the first half of June for Kerala, Karnataka (coastal) and S.Konkan?


(If things change either way, we shall follow that on MW), but,


However, Pre Monsoon showers would start earlier as per regions. Mumbai would get its initial pre monsoon showers around 5/6th June.


Quantum of rains will be discussed from MW-4, which will be up on 2nd May.


(This Monsoon chase is my personal view, and my personal analysis and deciphering is done as per my assumptions. May defer with other forecasts).

useful update, i am curious Rajesh, do you also factor in the Idnian IOD in your MW series. If yes, does it play a role in Monsoon onset ?

Ananth:I have answered Ron to a similar question. Please see the "comments" below MW-2.You will get your answer there.Thanks.

Awesome Rajesh. As you previously predicted we had good rains in Bangalore and I hope like you further precyed, it will last till Saturday.

Keep up these postings.

imd press conference tom at 4pm regarding the monsoon prediction...

Rajan:Thanks, and a compliment from you certainly means a lot to me..your patronising Vagaries holds value for the blog.
Will also be refering to your blog when I put up MW-4 on the 2nd of May for quantum forecast.
emkay: system to move N/NE..read on current weather page.

Rajan - it just rained 6mm in Bangalore, this is just a drop compared to extreme drought entire Karnataka is facing. Couple of days back Bangalore was about to touch 39-40degrees. Problem here is Bangalore locals have never seen Mumbai kind of rains wherein in a day it dumps around 400-500mm of rain!!!!

What Karanataka requires now is torrential rains for atleast 3months for agriculture to start, rivers to fill and ofcourse Bangalore should not abuse nature- protect its lakes and plant trees. Lesson for BBMP,BMRCL,BDA

Rajan - it just rained 6mm in Bangalore, this is just a drop compared to extreme drought entire Karnataka is facing. Couple of days back Bangalore was about to touch 39-40degrees. Problem here is Bangalore locals have never seen Mumbai kind of rains wherein in a day it dumps around 400-500mm of rain!!!!

What Karanataka requires now is torrential rains for atleast 3months for agriculture to start, rivers to fill and ofcourse Bangalore should not abuse nature- protect its lakes and plant trees. Lesson for BBMP,BMRCL,BDA

@rajesh the seasonal trough ,,never intrudes in western parts of maharshtra rytt???because i have observed that that most of maharshtra and entire gujarat are unfavourable locations for premonsoon rainfall,,,rarely they receive rain during april-may

Gujarat and Rajisthan from past 5 years have been receiving more rains. We can see Vortex,UAC and monsoon axis. But at the same time entire interior Karnataka, Rayalseema AP,TN are receiving very less rains and are towards desertification. Infact I have seen from June-Sept there is no rain in much of southern state - they are towards desertification. Maharashtra since last few years has emerged as intense rain spot with Mumbai as rainiest city and Amboli as most extreme rain spot overtaking Cherrapunji.In next next few years deserts may disappear from Raj/Guj but start appearing in Kar/AP/TN. It is time our scientist analyze this trend.


"" But, I felt the need to go a bit in detail, and probe into ananth's point of view.And this is what I saw:


The reasons are understood. All systems , UACs and lows from the Bay travel only Westwards and plough thru central India into Gujarat. Hardly a rare system has moved North into Bangladesh and cureve into the NE states.
Another change these last few years. When we should be seeing 2/3 depressions from the Bay in June and another 2/3 in July, we have UAcs coming, and pouring depression like rains. BUT, these rains somehow do not commence from the states of entry, thatis Orissa or North A.P. They pick up only after the system tracks inland, with the help of Upper Air Circulations at 700 mb and 850 mb. Though UACs have never been un common or rare, these last 2/3 years they have been dominating, which is not common. Well, I see some trends taking a particular route , no doubt. And this year too, the same trend seems to be continuing. But, it has happened before too. May be a cyclic change . Over the years, I have records of Gujarat getting heavy rains many times in the past. Take Bhuj for example...Do you know what is heavest fall there in a 24 hr time frame ? It is 468 mms ! In July 1959. The same year the year's total reached 1311 mms in Bhuj.Nalliya, Kutch had 294 mms in a day on 12 th August 1979 !1959 was harsh on Kutch.Nalliya had total rainfall of 1398 mms.Why, last year itself, overall ,yes NE states were low on rain, but Cherrapunji received extra heavy rains with 13511 mms.

But, we cannot come to any conclusion now, not in 3/4 years of happening.""

This year surprising Guj/Raj are much cooler and infact no droughts for past 5years. KAR/AP we know are in severe droughts. 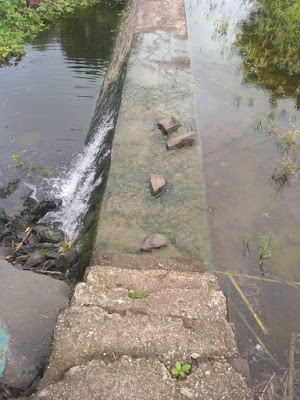