A western disturbance has created a dust storm over North-Western India, the haze from which hung heavy over Rajasthan, Haryana, Delhi and west Uttar Pradesh. A superb Satellite image (NASA) of this dust is attached.
As a result, after a week-long spell of blistering heat, people of the Northern/Western states got some respite, as temperatures across the states dipped on Thursday.

Heat wave has abated in Punjab, Haryana, Delhi, Rajasthan and Uttar Pradesh. Day temperaturesare down by aabout 2/3c, and now the highs hover around 40/42c in North-west India. Even the nights, which had gone over 30c in many a regions, and were as high as 33c in Hissar (+14c), are now around 26c levels (comfortable??). The normally cooler regions of Kashmir and H.P. have also "sobered" down, with Srinagar recording a high of 15c, and Simla 24c on Thursday.
Some lessening of the heat was felt over Pakistan also. The highest there coming down from 47c to 43c yesterday at Nawabshah.

But the heat is not over as such. Heat wave conditions continue to linger on over parts of Central region,East Uttar Pradesh, Bihar, Jharkhand and Orissa. The highest maximum of 45c was recorded at Bankura in W.Bengal. (IMD Map).

Forecasts indicate the arrival of another W.D. in a day.
The maximum temperatures are expected fall by another 2c over many parts of northwest, central and east India during the two days.
The rainfall pattern last few days was restricted to the 3"corners " of India. The North-East, where Cherrapunjee has recieved very heavy rainfall. 266cms from 1st.March till date ! Then the extreme North, due to the W.D. and the South.

Meanwhile, the rains in the south have lessened , as the wind dis-continuity line shows fragmentation. Though the trough from southeast Vidarbha to Comorin area across Andhra Pradesh and Tamilnadu in lower levels persists, the thundershowers will be persisting on a lesser scale next few days in Karnataka and Kerala. I expect the trough line to shift to the southern peninsula after 2 days, and consequently. a slight increase in thundershowers in Karnataka, Kerala and more so along the coast. Maybe creeping into South Maharashtra coast from Monday.
Monsoon Watch will be put up on 25th.April.
kapadias@gmail.com
By Rajesh at April 23, 2010 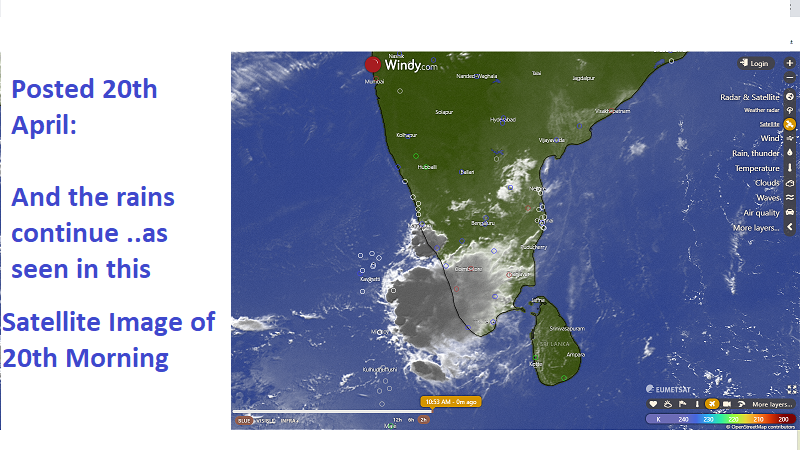