Delhi is  fog free from last 5 days, which is attributed to north-westerly winds which is not allowing the formation of fog after the passage of the western disturbance.

Forecast based on ensemble model prediction of IITM and IMD-GFS

On 17 January there is a 60% probability of moderate fog in Delhi, some places especially Delhi airport can record visibility in the range 200-300m (Figure 1).

As the next western disturbance, is going to arrive on 19 January, wind speed over Delhi will decrease significantly (Figure 2).

Based on these factors chance of moderate fog in Delhi (visibility in range 200-300m) on 18 January and dense to very dense fog from 19-22 January (visibility less than 50m). 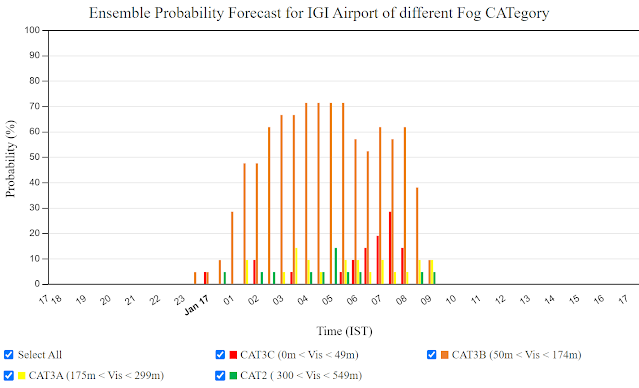 Coldest in Karnataka was Bagalkote at 8.6°c.