Cool and Pleasant Weather along Mumbai Area last 3/4 days...Due to

Fronts refer to the boundaries between air masses, which are large, discrete atmospheric bodies of unified weather characteristics. If a cold or warm front halts, it becomes a so-called stationary front. A stationary front is an unmoving one, at least near Earth’s surface. Neither abutting air mass has the power to shove through the other. Such a front may form when upper-level winds that had previously propelled a front along shift and flow parallel to it, or where air masses equally matched stall one another’s movements. Even though the surficial front may be basically stable, air may be significantly moving about higher up in the atmosphere. A stationary front can eventually dissipate, or, given a shift in upper-level winds or the relative strength of one or another of the air masses, might resume mobility as a cold or warm front.

The exact weather of a stationary front depends greatly on the characteristics of its constituent air masses -- their moisture levels, for example -- and the general instability of the local atmosphere. Often, however, conditions resemble those encountered along warm front weather: extensive cloudiness and showers. As a stationary front can be durable, such overcast and moderate precipitation may persist for days. 👇 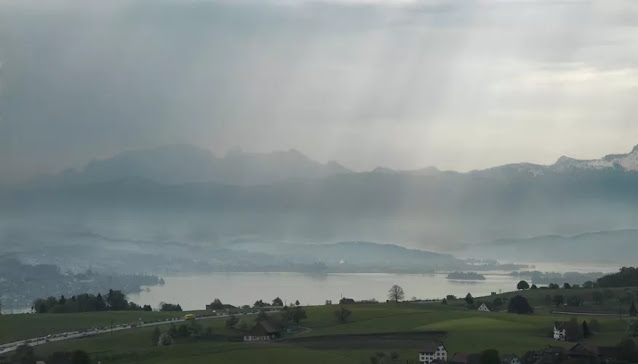 July like weather in Mumbai Suburb. Dark clouds and light rain. Rajesh, sir how many days this will go on? Not seen such climate earlier?

Sanjeev..Mumbai enjoying this weather due to reason explained..being different, I am putting up this explanation.
I feel Mumbai should become hot and Sunny by Saturday, to get ready for the evening thundershowers thundershowers..

Thank you Rajesh sir for your prompt reply.