Bengaluru Kempegowda International Airport recorded highest rainfall of 178.3 mm on today, the 12th Oct 2021 surpassing the previous all time record of 86.4 mm which was recorded on 27th May 2017. 0830

As on 12th Morning, Southwest monsoon was vigorous over South Interior Karnataka and active over Coastal Karnataka.

Madhugiri, Bukkapatna (both Tumakuru dt) 9 each;

As on 12th Morning, Southwest monsoon has been vigorous over Kerala.  Extremely heavy rainfall reports in cm are: Karipur AP (Malappuram district) 25,

Quilandi & Vadakara (both in Kozhikode district) 18 each, 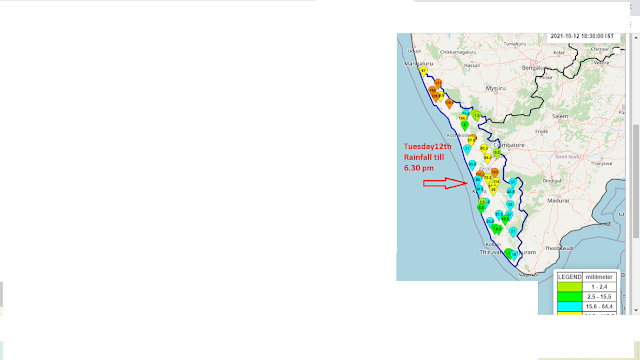 Outlook for NEM 2021:With the possibility of low BB-15 developing in Bay of Bengal and remaining at North AP/Odisha latitude, lower winds will continue to be mostly westerlies/South Westerly over Southern Bay for another week.
No signs of winds changing to easterlies for Tamil Nadu coast before 21st October.
NEM onset likely towards the 3rd week of October.
NEM write up assisted by Vag, Shreyas.