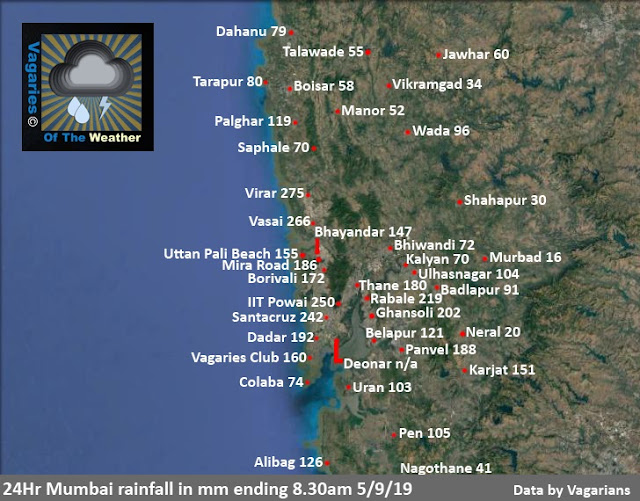 We all weather enthusiast are here together due to Vagaries blog only so very thankful to you and has learned lot about the weather dynamics and still have to learn a lot.


And as per mine personal view this avg concept between two IMD stations is unfair policy towards any rain event or seeing how much Rainfall Mumbai got !!

So all three days reflecting 100-160 mms avg which falls in Heavy to Very Heavy Rainfall as per IMD criteria !

As we all know Colaba is least rainy place in whole Mumbai with less avg and has less occurrence of extreme events compare to suburban Mumbai district! Even IMD also agrees on it.

Below Para from article:

What explains the disparity? Climatologists say wind patterns differ for the city's narrow peninsular south and the wide north, which is almost contiguous with the mainland. The two regions also vary in terms of topography and layout: the suburbs are hilly, greener and have lakes, with the national park being a major climatological influence, while the island city is more densely built up, with thin green cover. Because of these factors, says the weather bureau, rainfall recorded by the Colaba and Santacruz stations are dissimilar.

Accordingly, winds are stronger in the suburban side as compared to the island city," said K S Hosalikar, deputy director general (western region), India Meteorological Department. "Another factor is land mass. This is to be considered as (south Mumbai) is a narrow piece of land compared to the suburban mass." The implication is that it is easier for clouds to pass over a sliver of land, resulting in less precipitation than in a much broader land area. "Then there's topography and the presence of green belts like the national park and Aarey Colony in the suburbs," said Hosalikar, meaning that such factors affect cloud formation.
Additionally, during a heavy rain event, a cyclonic circulation forms near the northern Arabian Sea, owing to which winds blow in a north-westerly direction-as per IMD's classification, Colaba on Wednesday received heavy rain (64.5-115.5mm) and Santacruz extreme rain (over 204.5mm).

Same way if see July 2005 event then Colaba had mere 74 mms & Santacruz had massive 944 mm with further Vihar lake seeing 1049 mms . So here if we take avg of CLB & SCZ then comes to almost half 509 mms !! So this completely makes unfair and events are gets suppressed due to it!


On every occasion this year June,July Aug, Sep Suburban Mumbai dist have saw extreme heavy rainfall events with rainfall ranging between 205 to 500mm with places getting changes.

Abhijit: Thanks and all the good wishes for the future to you.

Vagaries has changed the concept of average between Colaba and Scruz from today.
Previously years ago we had only two stations recording rainfall, at Colaba and scruz. In fact Colaba was alone for almost 70 years.
Things are different now,we have many stations to compare, and city has also grown.

Thanks a lot Sir!

Yes indeed Sir Colaba can't be neglected completely as it is old station and still can be used as reference for Sobo representation rather than for complete city..

Yes. IMD also agreed now so at WMO also they depict Santacruz as official stn of Mumbai after city got expanded and suburban seeing huge population now with compare to city !

Rajesh thanks for the explanation of the Micro weather vortex formation. Helps non technical people understand the weather in a simple way.

And one more point. You have expressed regret for your estimate causing inconvenience. Please do not say so. You are already doing a great service to all of us with such detailed forecasts. This is not mandatory but rather voluntary by you and we should all be obliged to you. I know that even well established western weather models struggle to get forecasts right all the time. So in a tropical monsoon environment it is even more complex. That's why you have absolutely no reason to regret.

Blog is sharing excitement every-time any station in Maharashtra breaks records. Below facts are well established with differences in opinion. Request people to debate and bloggers from south should also join.

(1) What is causing 2019 excess Maharashtra rains?
We had 10 Bay lows systems originating from south china have been activated in north Indian Bay. Usually some take route to north - near Japan or come down towards south pacific and Indian ocean - giving rains to low latitude southern islands like Indonesia, Singapore, Sri Lanka and of course good rains to South East India. This time all went directly to north Bay hence torrential rains to Central India,MAHA,GUJ,RAJ. Horrible drought for low latitude southern regions. Timing for north bay low and cyclonic circulation over GUJ,MAHA exactly coincided, with augmented westerlies AS trough, east-west shear zone - leading to blinding catastrophic rains over MAHA. Can't these factors be analyzed earlier for early warnings? And of course Doppler image analytics.

(3) Gujarat, Rajasthan are no longer dry states - last 4-5 years have been receiving excess rains. Geography books needs to be updated. GUJ kutch and RAJ Jaisalmer are no longer deserts.

(5) What is causing 2019 excess Maharashtra rains? We have 10 Bay lows systems originating from south china have been activated in north Indian Bay. Usually some take route to north - near Japan or come down towards south pacific and indian ocean - giving rains to low latitude southern islands like Indonesia, Singapore,Sri Lanka and of course good rains to South East India. This time all went directly to north Bay hence torrential rains to Central India,MAHA,GUJ,RAJ. Horrible drought for low latitude southern regions. Timing for north bay low and cyclonic circulation over GUJ,MAHA exactly coincided, with augmented westerlies AS trough, east-west shear zone - leading to blinding catastrophic rains over MAHA. Can't these factors be analyzed earlier for early warnings?

Any updation for Mumbai rain in Comming days as Skymet seems to be updating that rain to pick up pace from. 8 sept