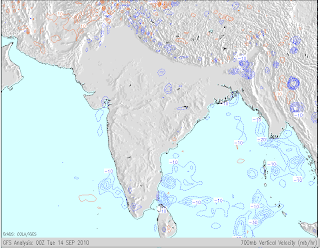 Now, in the map above, there are 2 vortices. 1 around the South Gujarat coastalregion, and 1 off the karnataka coast.
This enables me to forecast rains in the regions around the 2 vortice, as seen in the map.
Bharuch can expect some increase in rainfall intensity next 2 days. 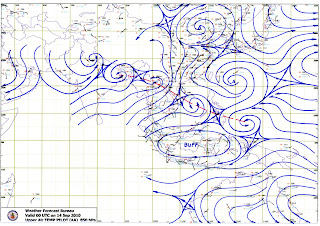 Yesterday's rain was mainly concentrated around the low near N.Rajasthan/Haryana. This is now an UAC, (UAC Thai Map above), and moved into Utteranchal hills. Should fizzle out by tomorrow.
There has been constant light to medium rains in T.N. and adjoining A.P. yes
terday and last night, due to complex vortices formation at 700 mb levels.
An UAC had formed in the Bay off the A.P. coast on Monday, 13th. Today, it has moved inland as I see in the Thai map (below). At 1002 mb, I do not read much of it. Of-course some rains in A.P. and adjoining East Mah. can be expected, but I see it going back to its "base", i.e. to 850 hpa level, and become an UAC within 24 hrs. That's my reading, and the system may still hang at MSL for a day or two. We'll watch it.
Eitherway, as per estimates and model forecasts, it should in all likelyhood move North-West direction. Track will be thru North A.P/Orissa/M.P.
Rainfall pattern will be monitred as the system and moves, but A.P./ M.P./ North interior Mah.and later after the 17th,west U.P./Delhi and Haryana could well be the beneficiaries. 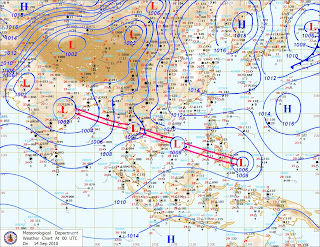 In the Thai map above,The sesonal low over Sindh, the western end of the axis, has now weakened to 1002 mb. Seeing these developments, I feel the SWM will widhraw from West Rajasthan by wednesday/Thursday, 15th or 16th.
Monsoon rains will also be done with from South Pakistan, Sindh regions from middle of next week, around the same dates, i.e.15th/16th. Sept.
Mumbai Weather:
Tuesday:

What would cause thunder showers in Mumbai today and tomorrow? The vortex off Gujarat coast?

I strongly believe that the featured low over land will intensify given the favored warm moist air inflow, and the best of all decreasing wind shears(horizontal) and development of Vertical Vortex in late days runs. I w'd not be surprised to find this one having central pressure nearing to 998mb!

nt,
sorry for the late replies.
actually the vortex was getting stronger in the morning, as I saw thunder clouds (cumulo-nimbus) developing around.
Anyway, saw some of these with distant lightning in the evening.
Akshay, you could be correct.I mentioned my doubts as the system was at 1002 mb, and showed lack of support.And pierced by strong jet streams.