Look out: Record Breaking La Niña Occurring?
Direct Report from The Hockey Schtick:
From a discussion board at NOAA comes this graph showing the developing La Niña of 2010 might be a record breaker. La Niña causes multiple global climate disruptions including a drop in global temperatures and extreme weather events around the globe, which no doubt will still be conveniently blamed on mankind's evil ways. The last 2 times of record-contending La Ninas in 1954 and 1973 were during the global cooling scare.* (see vagaries' note below) 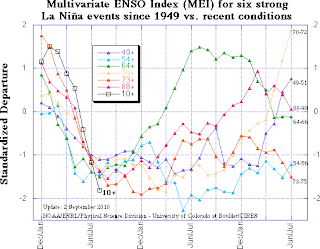 The most recent (July-August) MEI value shows a continued drop from earlier this year, reaching -1.81, and 2.35 standard deviations below April-May, both record-fast drops for this time of year. In fact, the three-month drop set a new all-time record for any time of year, beating a drop in 1998.
ZERO HEDGE reports:
The most recent MEI rank (2nd lowest) is clearly below the 10%-tile threshold for strong La Nina MEI rankings for this season. One has to go back to 1955 to find stronger La Nina conditions for this time of year in the MEI record, and back to September-October 1975 for lower MEI values at any time of year.
Conclusion:
We have one heck of big La Nina that has formed very quickly. We have not seen conditions like this in 55 years.
What does it mean for the Asian Weather:
La Nina brings warm water to the western Pacific. This will result in big storm after big storm hitting into China/Indonesia. So far there have been 11 typhoons to hit Asia this season. The most recent is Fanapi. It is about to make a mess of southern Taiwan. From there it is off to China. This powerful La Nina will continue for at least four more months. It is likely that it will end as quickly as it appeared. That transition will bring us violent storms. These in turn can send a whole lot of pulses, read systems, into the Bay, and result in strenghtening the NEM.
And the rest of the World:Look out for an extra cold winter and some cold water splashed on the claim "2010 is the hottest year ever."
Why is this La Nina cycle so strong? I have no clue. Nor do the people who study global weather. The strength of this ENSO cycle is no doubt related to that phenomenon.
*And a Final word on the so called "Global Warming"
(For new readers, vagaries has always been against the concept of so called "Global Warming". See archives of vagaries for a series of blogs in 4 parts explaining the facts against it).
Presto! Past global cooling 'adjusted' away! Deja Vu '72?: Dr. Hubert Lamb stated in 1972 that the global temp trend 'had been slowly dipping for the past 20

This powerful La Nina will continue for at least four more months.

erm so will La Lina exist for just 4 more months before going to El Nino or La Lina won't be so powerful after 4 months??I read some places that this La Lina could go on till 2012...

All india rainfall so far this month is 174.8mm which is 30.8% above normal. As more rain expected in coming days (at least 50mm in next 8 days) , September 2021 most likely be the wettest September after 1993. We require another 60.4mm with a rate of 7.55mm/day to reach normal all India rain figure of 880mm. Data compilation by Vag. Vineet