A “truly extraordinary” wave of frost will cover more than half of Europe, warns Meteo Giornale. A mass of very cold, glacial air will stretch directly from Siberia into Russia, cross the Urals and then expand to the heart of the Old Continent.
It will be “an epochal event for the end of February,” not only in Italy, but also in parts of Europe. “It is very unusual at the end of February to have to deal with freezing flows of such intensity, it is a historical.”
.

.
Frost waves of this magnitude are quite rare for this period at the end of winter.
The invasion of freezing from Russia to Central and Eastern Europe over the weekend and beginning on Sunday the frigid winds of Bora will also reach Italy, bursting on the Gulf of Trieste and the Upper Adriatic and then spreading over the North and then Marche, Umbria and Tuscany.
Forecasts indicate that the Center-North of Italy could be hit, with frost and even snow to the plains,  perhaps exceptional snowfall. If snow falls in Rome, it has never occurred in this period in the last 30 years.
San Francisco: 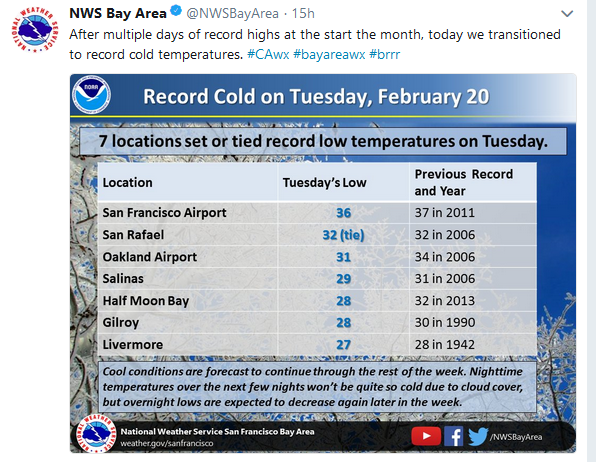 So.finaly we can see heavy showers in abu dhabi almost after 10 mnths
As i still remember last year historic thuderstrom in a
Uae which was predicted by rajesh air that bring uae almost standstill


On other side....
Cape Town worst drought stares - day zero!

People blame el-nino but actually as per records el-nino is better for NE monsoons only lifeline for dry SE India otherwise faces series of consecutive droughts.