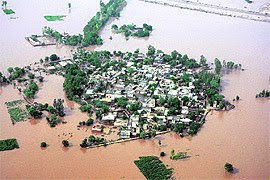 The flood fury in Punjab has been destructive.Ambala, Patiala and Sangrur rural districts to come under the spate of flood waters.Ambala recieved 600 mms of rain in 3 days consecutive, and Patiala getting 353 mms, 242 in excess of the normal. In Patiala where 15 villages have been submerged in water and paddy crop in 80,000 acres has been washed
away.
As the UAC now lies over

U.P.(remnant of the low), the axis of monsoon axis has shifted northwestwards and now passes through Anupgarh, Churu, Lucknow, Patna, Bardwan, Canning and thence south-eastwards to east central Bay of Bengal.Well, almost into a mini break monsoon situation, as easterlies are getting replaced by westerlies over Indo-gangetic plains.
A decrease in the interiors of the peninsula, M.P.and Gujarat seem iminent in the next few days. There is a possibilities of rain increasing in the interiors of the peninsula from the 13th. when the axis may shift south.
We will have to anticipate a low in the bay to get revivals of rain along the eastern coast.
Moderate rainfall should continue along the axis, that is parts of U.P,Uttaranchal, certain areas of northern-eastern M.P. and regions of H.P.till 13th. July, the date from when ECMWF shows the axis shifting south.
Gujarat rains will reduce considerably from 12th, when the off shore trough can be expected to move away from the Gujarat coast.
But, the off shore trough from Gujarat coast to Kerala coast persists, keeping up hopes for some rains to continue along the west coast of India.In fact, models show the trough "reving up" a bit on Monday, around the North Konkan area.
Mumbai:After a wettish Friday night, Saturday will be a day of passing showers, with with even a few brighter intervals. On Sunday, expect the rains to increase from night (with thunder) into Monday. saturday rains will be about 25 mms, but Sunday, may be more rainy and the city may get 35-40 mms, with about 40 mms on Monday. tuesday will see passing showers again, with some bright intervals and 30 mms of rain.
Mumbai Colaba total rain this monsoon is 1350 mms till Friday evening. In 2009, end of August total was 1242 mms.
Write up on the Record U.S. Heat from our Partner Blog here.
kapadias@gmail.com
By Rajesh at July 09, 2010