(2) Northwestern India and North-Central Pakistan  received precipitation due to consistent passage of systems in westerlies.

(3) Pre-monsoon convective activity increased over central and peninsular India due to presence of wind discontinuity. 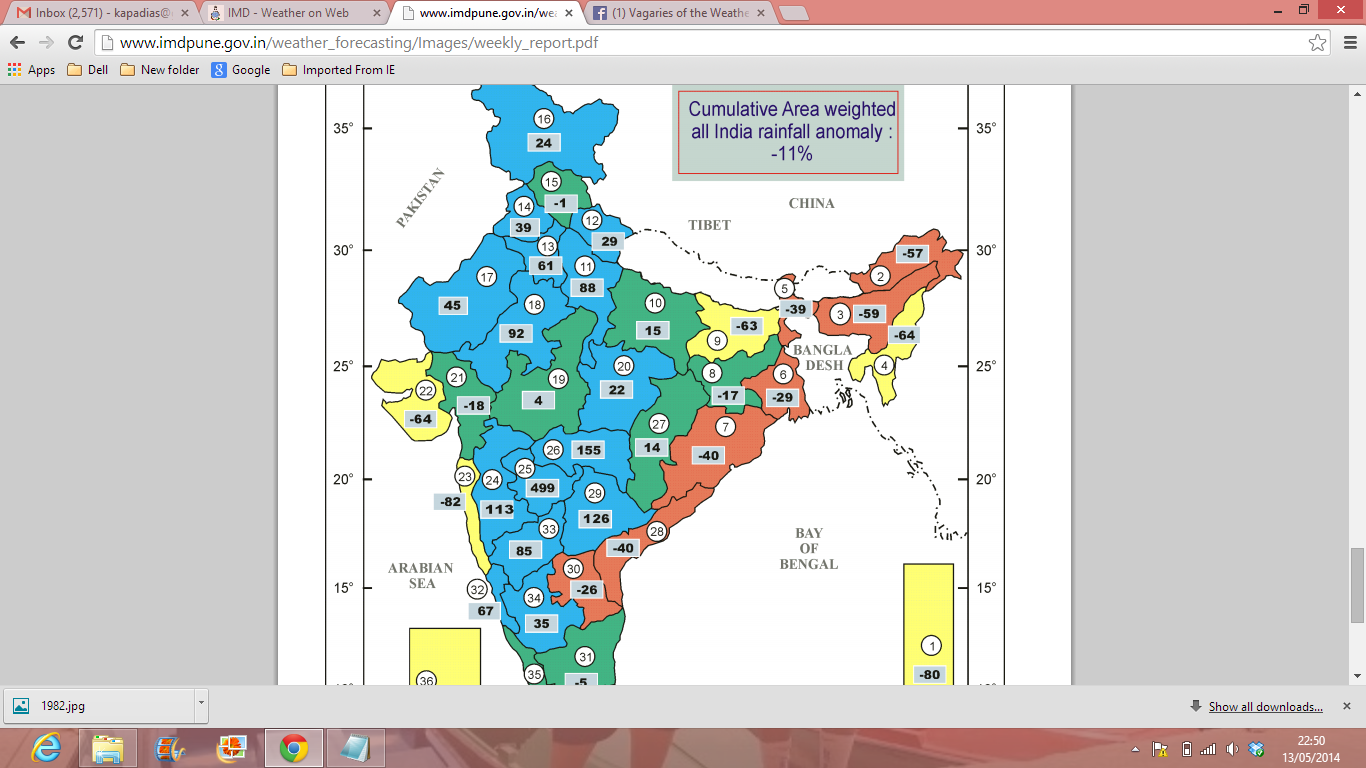 (4) Heat wave conditions prevailed in some parts of west Rajastan during initial part of the week. But, subsided later.

(5) MJO gained amplitude over the Atlantic & African regions and propagated eastwards approaching Indian Ocean. This is seen to be manifested in the form of a low pressure area over southwest Bay of Bengal. Also, the lower tropospheric wind anomalies  indicate stronger than normal easterlies over south Peninsular region which caused moisture incursion leads to increase in rainfall activity over peninsular and northeast India.

Heat should  to pick up in the Rajasthan/Sindh regions soon,  so good chance for the seasonal low to form and establish itself, at least by the 20th. Today the pressure at MSL is 1004 mb, with the core at 1002 mb.
The Sub Continent hot spots have just about touched the 45/46c mark (it is already Late. Refer MW-1) and should head for the 50c mark by around 20th May.

2. ITCZ: Indicator: +ve
As it is by the 10th, that we should have the ITCZ nearing the Equator. Only then would the Bay branch of the SWM could commence in the Southern Bay by the 15th of May. But, it has crossed Equator and is around the 5N latitude.

3. Jet Streams: Indicator:-ve
These are streaming away in a Westerly direction above the 25N line. But the trough looping down is not a very healthy trend.They are just about getting Easterly around 10N. Needs a rapid change now.

4. Cross Equatorial Winds: -ve in Arabian Branch...+ve in Bay Branch
Somewhat getting  established in the Bay region. SW winds, with sufficient speed hitting the S.Myanmar coasts, covering the Bay Islands with 20-30 knts, and could herald the arrival of the SWM in a week's time there.
Arabian Sea winds are dis organised, and in fact winds are heading South in the Central Sea. Sufficient speed in getting the "Somali Current" established is still lacking. The SST off the Somali Coast is 22/24c, While the required SST in First week June is 17/18c. (Required to form masses of Monsoon clouds in the warm central Arabian Sea). 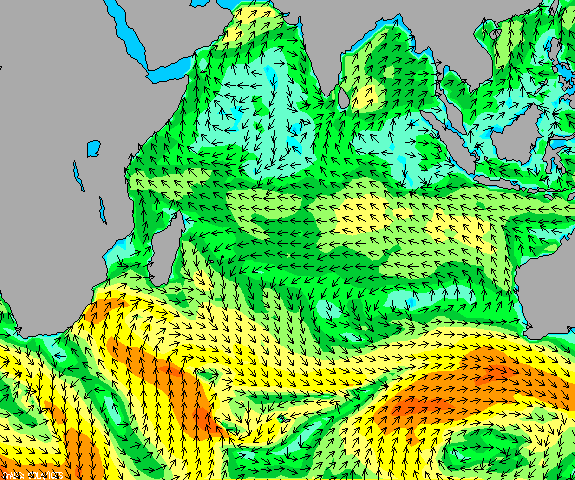 5. ENSO: The sea surface temperature anomaly across the NINO3.4 region (located in the central Pacific) has recently risen to +0.5 °C, warming by 0.1 °C from last week. El- Nino is firming up slowly.
Since March, Nino 3.4 has warmed up by 0.3c (See Diagram). 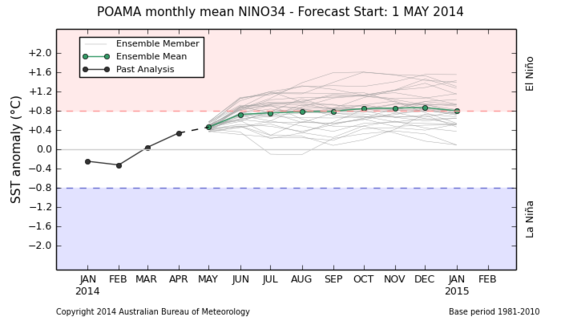 As indicated in earlier MWs, it is gradual in developing. We would expect full El-Nino conditions by August.

When the index is within the centre circle the MJO is considered weak, meaning it is difficult to discern using the RMM methods. Outside of this circle the index is stronger and will usually move in an anti-clockwise direction as the MJO moves from west to east
In short: MJO becoming neutral in Arabian Sea and slightly strong in Bay from 18th May.

SSTs at Kochi, Mumbai, Trivandrum and Chennai are 30c, while Port Blair is 31c.
Images below show current date anomalies of 2014 as compared to 2013.

Conclusion :
SWM seems to be gathering and preparing to set in the South Andaman Sea by the 16th of May ( On schedule as per MW-3 additional Map).. Likely to advance into the Andaman Islands in the next 2 days.
But, it is indicative now, that SWM may be slightly delayed by2/3 days in approaching Maldives. Sri Lanka. All likelihood of catching up on Kerala coast by 1st June, and then maintaining the dates as per our MW3 schedule.

Apparently, it seems that the SWM may progress normally in advancing up to 20N. But very much possible of a delay and slow progress in its advance after 10th June, that is North of 20N. Central India and North India alongwith Sindh and Pak Punjab could see severe heating up in first 3 weeks of June.
This can occur as Western Disturbances will slacken and allow the seasonal Low to build up, and then create a pressure gradient to pull the Monsoon Northwards.

Second Part of MW-4 with Map of Monsoon Advance in North and Rain Estimated Forecast region wise will be put up on 17th May at 9 pm IST.

Monsoon Watch -4 and Part of MW 4 ( Part 2..which will be on Vagaries on 17th) Published in Lokmat today..Page 5
http://www.epaper.lokmat.com/lokmattimes/epapermain.aspx?queryed=78

Imd forcasts onset of monsoon over kerela on 5th june .