Posted on Tuesday 15th: SWM Withdrawal Map (as per Vagaries)  showing regions where SWM has withdrawn: 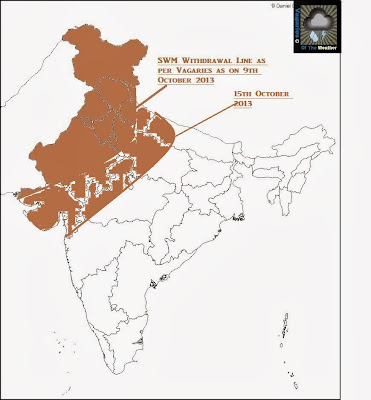 All attention towards the Monsoon axis now....

The axis is expected to slid Southwards fast, and will pull the SWM southwards with it.
The SWM is expected to withdraw from West MP, Gujarat  and West Nepal by Tuesday 15th and in North Konkan ( including Mumbai), North Maharashtra, Rest of MP and Chattisgarh from Thursday 17th .
Shall put up withdrawal map on Tuesday Night and another on Wednesday showing the 2 days withdrawal..

Mumbai:
SWM expected to withdraw from Mumbai region from Thursday 17th.
The off shore trough currently in a east-west position off Mumbai, weakens considerably in next 2 days, and almost becomes non effective after Wednesday.
As the axis shifts Southwards, We will see Easterlies taking over Mumbai in the day...meaning high day temperatures.

Tuesday 15th : Partly cloudy, with a shower possible in some parts of city..Winds turn NE on Tuesday, hearlding a rise in day temperature to 33/34c.
Wednesday 16th/Thursday 17th:  SWM Withdraws from Thursday:
A thunder shower may be possible in outer townships on Wednesday. As the SWM withdraws, we see east winds taking over, and a fall in humidity levels are seen. Warm and sunny, the day will rise to 36c by Thursday.Night temperatures drop by a couple of degrees in Suburbs and outer townships.

Pune may get a shower in some parts on Tuesday. SWM withdraws from Thursday 17th, and we see the nights getting distinctly cooler, with the low reaching 17c by the weekend.

NEM Watch -3
The current ENSO trend, which is neutral and the MJO, which shows  a weak phase till the 21st, and a "neutral phase from the 22nd till end of October.

A rapid movement of the ITCZ towards the South, we see Easterlies picking up along the TN coast from Wednesday.
NE winds start their domination from Tuesday 15th.

However, it can be assumed, seeing the November MJO and Easterly wave flow, with a couple of strong systems from the Bay, the NEM will be near normal in Chennai (Normal = 822 mms .Expected 800 mms).
Overall we see the NEM can be above normal by 10% in TN (All TN average = 440 mms. Expected 500 mms) and about 10% above Normal in Vellore (Normal 414 mms. Expected 450 mms).
Bangalore may get its normal share of 225 mms for the season.

From the current trends, it seems the NEM will set in around the 22nd of October.We can assume the NEM to remain weak to moderate till the end of October. We see the Monsoon strengthening only in November.

On Wednesday, a low form in the Southern parts of the Bay, around the 10N/12N line.
The Low moves westwards, and gets embedded in an Easterly trough East off Sri Lanka along the 10/11N line. But due to lack of favourable parameters, it is apparent the easterly wave lacks strength, and may precipitate only around Sri Lanka region (East coast)...

Exactly one month of extended monsoon season in Mumbai.

Indeed as it is mentioned in the article, easterlies have commenced in Madras city and we experienced light drizzle early morning.

Finally got to see light foggy morning , thus making conditions favourable for the SWM to be kicked out of Mumbai and surrounding.

@ Sam. Normal withdrawal date of SWM from Mumbai is 1st Oct. So only 16 days extended SWM we can say.. But not excess rain from extended SWM this year !! Just isolated sharp shower at some places & not over wide spread area !! Last year Oct farewell was much better !! As this year, since BB-13 onward Mumbai was just eluded and all heavy rain mostly in Gujarat belt!!

this morning, i could see a bit of fog in deonar region..

Final round of Dark clouds have gathered in Vasai all of a sudden.

Yes Abhijit , last years thunderstorm's were much severe with good amount's of rain noted' compared to this year' Although Mumbai had superb rains during the intial month's of monsoon season that is June and July covering nearly more then 80% of rains in these 2 months, remaining 2.5 months was with hardly any rains except few days of sharp shower's and few thunderstorm's, Just a dry extended period of monsoon season. Now let's see how the winter season perform's this year.

Yeah.Correct Sam.. Hopefully should have good winter from Dec.. Before that would like to see some TS in Nov also !!

It's got very dark here at Andheri West, looks like a shower is in order now.

@Sam - some of us started expecting the SWM to withdraw from Mumbai by September last week itself given all the TS activity around middle of September hence this appears like the Monsoon is dragging on and on. Also, this time the Monsoon set in quite early in Mumbai too and it rained very heavily for the first 2 months. It makes us feel the SWM has been around forever. And now Abhijit is asking for some TS in November too!!

@ Nimish. This Oct is going worst for eastern mainland towns!! Just 3/4 rainy days out of 15 days for Dombivli to Badlapur/Karjat/Panvel belt :( .Only coastal places are having daily morning showers !! Here now also sun shining .. No Easterly evening TS in Oct till now !!

Very dark here with a mild shower in malad

after an early morning shower, which saw 10.1 mms here (till 8.30 am), there was a light drizzle (0.3 mms after 8.30)...cloudy but bright now..significant point is the pressure today has gone up to 1012..see vagaries readings page for comparison of last few days..

Dark clouds have formed in the eastern sky here in Vasai, looks like there will be thunderstorm any moment.

Mumbai SCZ recorded 19mm rain till 11.30am today. Winds from SE at 6kmph & temp 26c at 11.30am today.. So all activities limited to coastal places continues today also !!

The skies turned really dark here at Andheri West around 10:15 AM, it's over cast currently, but not a drop of rain so far in the last 2 hours. The breeze too had picked up some time back and I thought there will be a 20-30 min. TS, however so far it's just stayed put and is refusing to do anything.

thunderstorm has started in Vasai with heavy showers

With the Doppler Radar continuing to stay out of action, it is difficult to see where the shower action is in and around Mumbai

It rained contineously heavy for half n hour in mira road to the extent the the roads r some wat flooded a bit.n its jst drizzling

I think the rains were very heavy in dahisar to vasai, virar belt.but the half n hour rains were extremely heavy

Wow.You all lucky there again.. As it seems that this Oct farewall rain is just restricted for coastal area only ! Here bright sunshine with just few cumulus in Badlapur !! Waiting eagerly for TS..

Today might be the last day for north konkan thunderstorm.

@ Sam.. It would be nice to say only N.Konkan coastal strip !! As nothing in N. Konkan interior region already from past 3 -4 days as Kalyan, Ulhasnagar, Ambernath, Badlapur, Karjat, Murbad, Shahapur , Bhiwandi , Matheran & even ghat section is complete dry from last 3-4 days !!

@ Abhijit , the cumulus clouds that u see in badalapur right now , are they developed one's, why i am asking this is 'because here in Vasai the sky has started to clear out, but towards the eastern sky another band of huge cumulus clouds have formed , looks like as though another round of thunderstorm is getting ready , cant say they even might dissipate.(vanish).

@ Sam. Nothing develop here till now.. Just coastal effect is that it has turned windy from West side now & hazy..

Chennai : Yes the winds have changed to North Easterlies. Praying god to have a powerful monsoon defying all forecasts...

Anyone who has a forecast for 2005 NEM which defied all parameters I guess.

in thane in rained quite heavily for 20 mins in the afternoon.. quite overcast now

So all 3 triangular cities Mumbai , Pune & Nashik has got almost same rain today !! But all middle towns between of them were left out !!

Mumbai/Maharashtra already had excess +++ rains. Not sure readers are asking for more??? In fact Mumbai had good thunders storms 2- 3 weeks back with lightening signifying monsoon withdrawl but GUJ rains put SWM back to origin and again cycle started.... Whatever it is entire central belt Maharashtra, Gujarat, Rajisthan, MP, chatisgarh, Orissa has extreme to excess rains.

Interesting fact from IMD - TN has probability to face droughts - every 2 years it can face droughts.. 2012 TN had deficient rains with NOV completely dry....
Krishna correct - 2005 TN NEM was highest and best ever recorded in history....

Getting much relief here,after a heavy drizzles,medium rains started in dombivli.

dark skies and thunder in deonar for the past 30 minutes