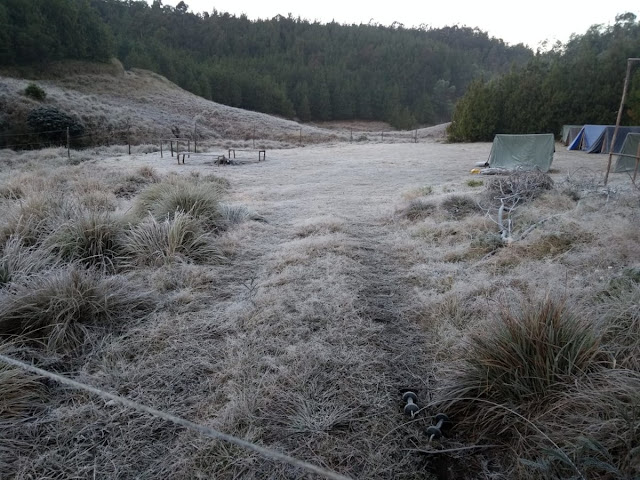 (Meteorologists please note the frost has occurred only in the valley, not on the mountain tops. Cold air settles down in vales being heavier. And also due to lesser winds as compared to tops.)

The Times of India reported that the Indian Meteorological Department (IMD) said that minimum temperatures were falling below the usual in Malappuram and Kollam districts. Idukki, Wayanad, Alappuzha, Kannur, Ernakulam and Thiruvananthapuram districts recorded a sharp fall in minimum temperatures on Sunday.
Valparai in TN saw 2.5c on 7th Jan.
Jan 4th: Ooty aw 6.4c, and Kodai 7.8c. Valparai was 3c.
Maharashtra:
Nagpur was  cold in the state, recording 3.5 degrees Celsius at night, an almost 9-degree deviation from the norm. It was colder than places like Shimla in Himachal Pradesh, Patiala in Punjab and Banihal in Jammu and Kashmir on 29 December.
At 5.9 degrees Celsius, Pune recorded its coldest morning in 18 years on 29 December.
Reports from Mahabaleshwar also indicated ice and ground frost formation around Venna Lake. Private agencies reported 4c around Venna Lake, Mahableswar.
Niphad (GrapeFields in Nasik Dist). recorded i low of 1.8c on 27th Dec. However , the lowest record in Niphad  is -2c. (See Vagaries Extreme Blog).
Shimla, the Himachal Pradesh capital witnessed snowfall on Sunday
Shimla received 5 centimetres of snow between 8.30 am and 5.30 pm on Sunday and recorded a maximum temperature of 3.7 degrees Celsius, while tourist spots Narkanda and Kufri in the district also witnessed light snowfall.
excerpts from Firstpost