BB-14 makes landfall in A.P. near Kakinada and Yanam. Officially crossed and making landfall.
But, estimated core winds speed was 30 knts, less than the IMD cyclone norm and in the Deep Depression category.
(Vagaries prediction of Landfall below Cyclone norm was mentioned on 12th December.)


The system grazed the TN coast and went Northwards due to the favourable upper air divergence.
Expected to weaken fast and track NE inland. 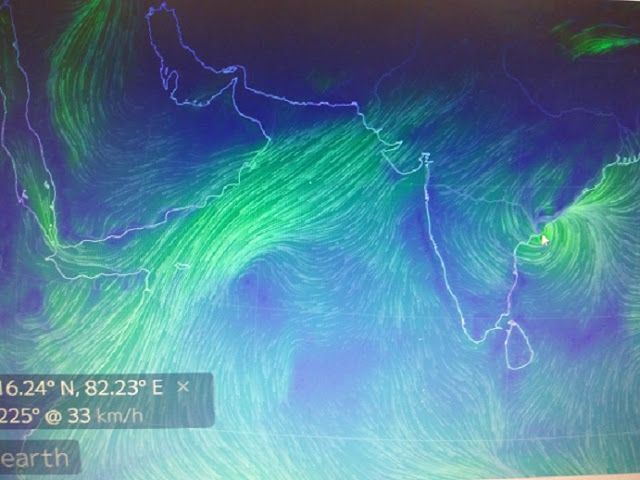 If this trend of NEM failure continues for next few years over south east India - people soon need to vacate Chennai, many areas of TN will have agriculture abandoned, mass migration to other states. Same holds with south Andhra - Rayalseema, Anantapur - total barren.
Great tragedy to see system which originated from south Bay, Tamil Nadu, South Andhra should have been benefited - instead other states orissa (already snatched Titli system), MP, Maharashtra - vidarbha.

This means the ocean and atmosphere are not reinforcing each other, or coupled, and it is this coupling that defines and sustains an ENSO event, and results in widespread shifts in global weather and climate.

The natural seasonal cycle of tropical Pacific SSTs and cloud means the likelihood of an ENSO event developing during mid-summer is lower than at other times of year. This is because the difference in SSTs across the Pacific Basin eases towards a minimum in late summer to autumn. Late developing El Niño events do occur, such as in 2006–07 and 2009–10, although there is no record of one starting in January.

Most models indicate SSTs in the tropical Pacific Ocean are likely to remain near or above El Niño levels until at least the middle of 2019. However, models typically have less skill when forecasting through autumn. If SSTs did maintain their current anomalous warmth through summer, it would increase the chance of El Niño emerging in 2019.

Next update expected on 8 January 2019