Konkan and South Gujarat coast was lashed by medium to heavy rains on Tuesday evening/night. Heavy amounts of rainfall recorded were Guhagar 11 cms and Mapusa and Margao, Goa seeing 7 cms.
Fairly heavy thundershowers were prevelent over the western ghats too, with Lonavala receiving rainfall of 5 cms.
Yesterday's blog mentions the possibilitiy of a low pulse aloft, at 700 hpa, moving westwards towards Konkan. Vagaries had estimated this UAC to arrive by Wed. But, the UAC "overtook" this forecast and reached N.Konkan a day ahead of the ETA.

On Tuesday,the thunder cells appeared as a result of the formation this UA 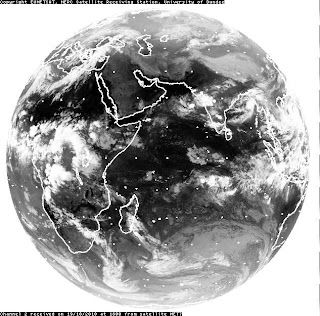 C (at 700 hha) in the region.Illustrated in Tuesday's IMD map.
As seen in the Dundee satellite image of Tuesday 11.30 pm, the clouding appears distinct and seperate from the remnant low, now having moved away westwards, and weakened to some extent. Dundee Image of 11.30 IST of Tuesday shown to illustrate the seperate identity of the 2 systems.
Due to this UAC, along with the Konkan belt, South Gujarat coast, Southern M.P. and Northern interior Mah. may get rainfall next 2 days. (See Mumbai forecast on page).
A huge area of 1006 mb low trough is seen over the Gujarat/Mah. region, which may form a south dipping trough up to North Mah. coast by Wednesday/Thursday.
A fresh low has formed in the bay today,19th.October. Presently it is situated in thr eastern bay, and is at 1006 mb pressure.Even though, swirls can be seen rushing towards the centre.
A W.D. travelling eastwards could bring winter's first precipitation to the sub Himalayan states of H.P.and Utteranchal. Temperatures in the Northern belt are very much higher than normal and nights are as much as 5-7c above. Today's chart of the Northern cities can be viewed here.
(Posted at 12 midnight of Tuesday, 19th).
By Rajesh at October 20, 2010