1. Seasonal Low: As the average day/night temperatures in the Northern/Central Sub-Continent areas show a distinct heating up, the -ve factor from the previous MW (last
week) discussion shows some improvement. Heat waves are seen in the Central and Western regions now.

Day and night temperature average of the anomaly remained below normal till 16th April in most of NW and Central India. Above normal have recently started in Northern/NW and Central Sub-Continent.

The Line of Wind Discontinuity should normally stabilise around Central India perpendicular down into the Southern Peninsula by mid April. This enhances the speed of the Seasonal Low formation. Normally is required to start taking shape for the monsoon by the second week of April –As on date,  LWD from MP through Central Maharashtra down to Interior Karnataka is forming.

In reality, this LWD remains till June, in variable phases, and finally merges with the Monsoon trough (axis)/ITCZ  when the ICTZ moves towards the Sub Continent. 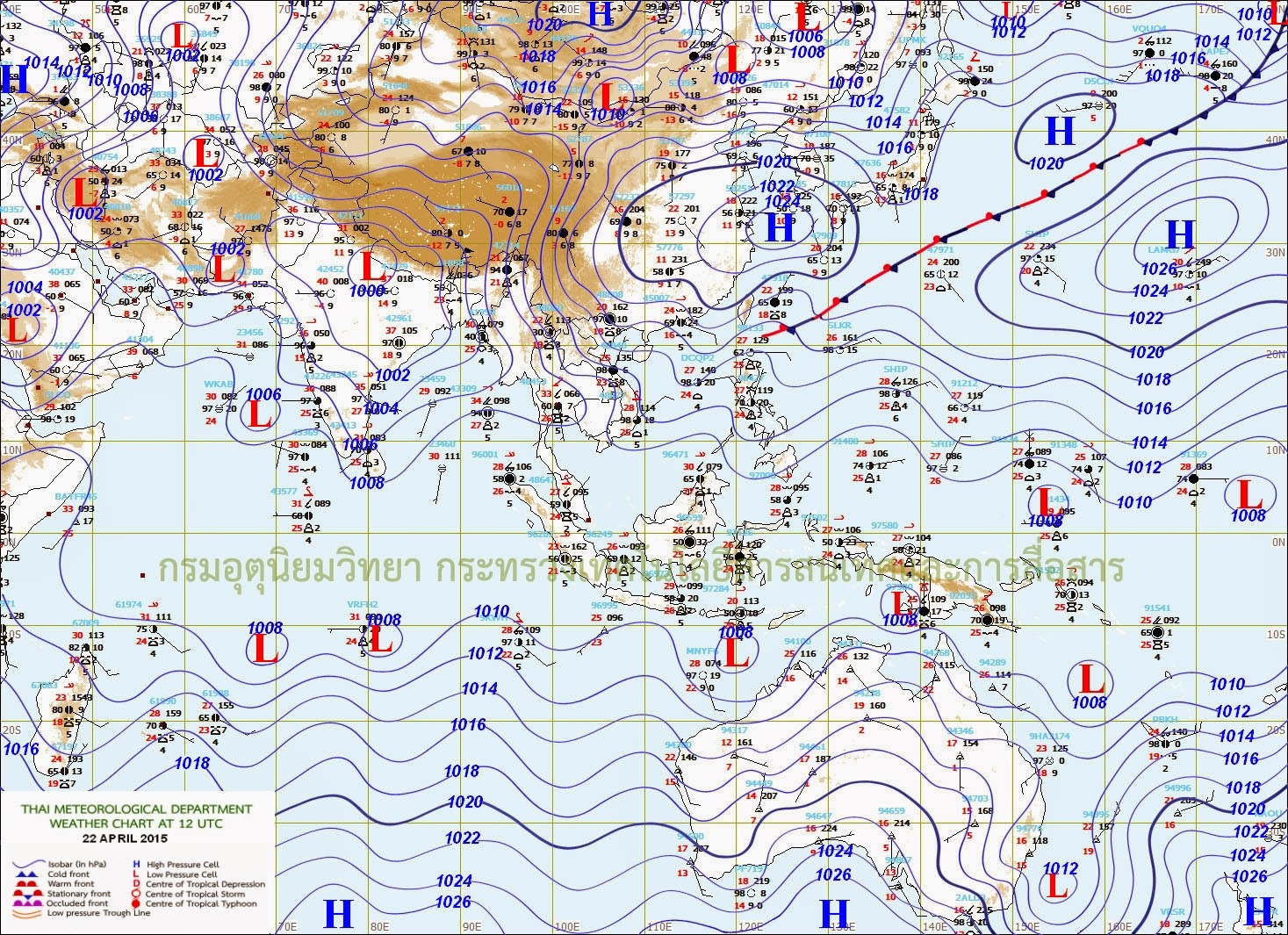 As the second half of summer progresses (by 15th May): Lows over MP, Central India, Chotanagpur plateau(Jharkhand) should become less conspicuous because of the strengthening of the seasonal low over NW india.

As mentioned, Seasonal Low normally should reach a low nadir of 994 mb in June in the Thar Desert, and with 1008mb in the South Arabian Sea, a perfect gradient is created to attract the south -west winds towards the coast.

Rest of NW India too shows a marginally Higher reading of 1000/1002 mb
The quick formation of an optimum Seasonal Low was delayed due to persistent A-3, A-4 and A-5 and absence of heat wave in Central and Northern regions of the Sub-Continent.
Thunderstorm activity in Southern Tibet is also seen to be picking up. 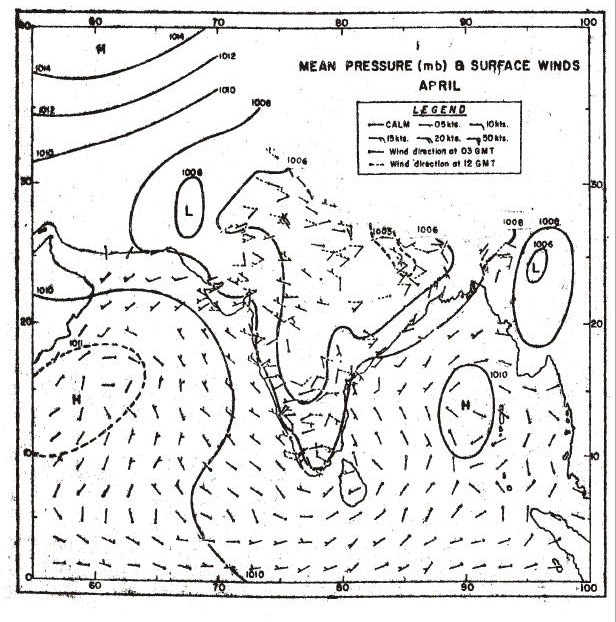 2. ENSO: During January-mid March 2015, near-to-below average SSTs were observed in the eastern Pacific.Positive SST anomalies have persisted across the western and central Pacific.
Recently, above-average SSTs have strengthened across the eastern Pacific.
The latest weekly SST departures are:
Niño 4 1.3ºC
Niño 3.4 0.9ºC
Niño 3 0.8ºC
Niño 1+2 1.3ºC
NINO 3.4 is the predominant Region to see for El Nino..For our region.
The SOI is at a high level at but remains within values indicative of neutral ENSO conditions. The latest 30-day SOI value is +5.1.

El Niño: characterized by a positive ONI greater than or equal to +0.5ºC.
La Niña: characterized by a negative ONI less than or equal to -0.5ºC.
By historical standards, to be classified as a full-fledged El Niño or La Niña episode, these thresholds must be exceeded for a period of at least 5 consecutive overlapping
3-month seasons.
The most recent ONI value
(January– March 2015) is + 0.5.

3. Cross Equatorial Winds: Last week, the Monsoon winds, which originate from the Southern Indian Ocean as SE winds, and cross the equator to become South-West, were weak. now, we see the re-organisation of the Southern Hemisphere SE winds, as no hindrance is seen to occur now.

Let me explain, that the winds on crossing the equator break into 2 branches. 1) gushing into the Arabian Sea, and 2) moving into the Bay of Bengal.
In the Western Sector, the Arabian Sea branch is still struggling to get organised. Here, sufficient wind speed off the Kenyan coast has yet to form the SE flow required. But should
re-organise fast. SE winds are now getting organised and weakly striking the East African coast between the Equator and 5N, though still weak. The Northwards movement of the
ITCZ will surely hasten and strengthen the winds. 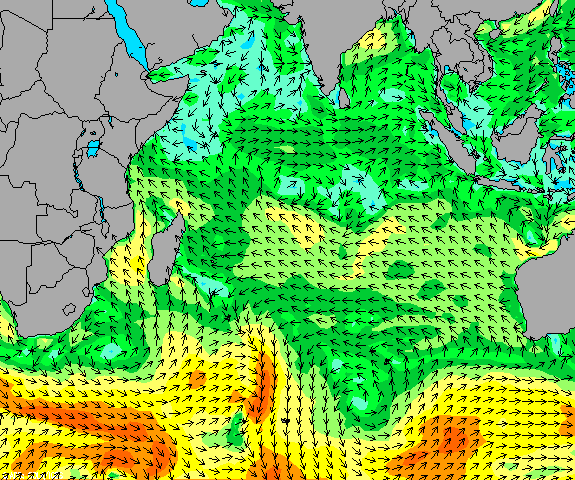 And that is exactly where the start should be for the SWM to arrive at the Andamans. Upper winds at 100-400 hpa are vigorously aiding the lower winds to attain the required
strength. We prefer the Bay Branch to be better organised, as the S W Monsoon is expected there in 22-25 days…

Mascarene high pressure zones in the South Indian Ocean. Main High reading now 1031 mb, and 2 more Highs (in the forming) have been observed, one at 1030 mb and another at 1028 mb. between Madagascar and Australia. 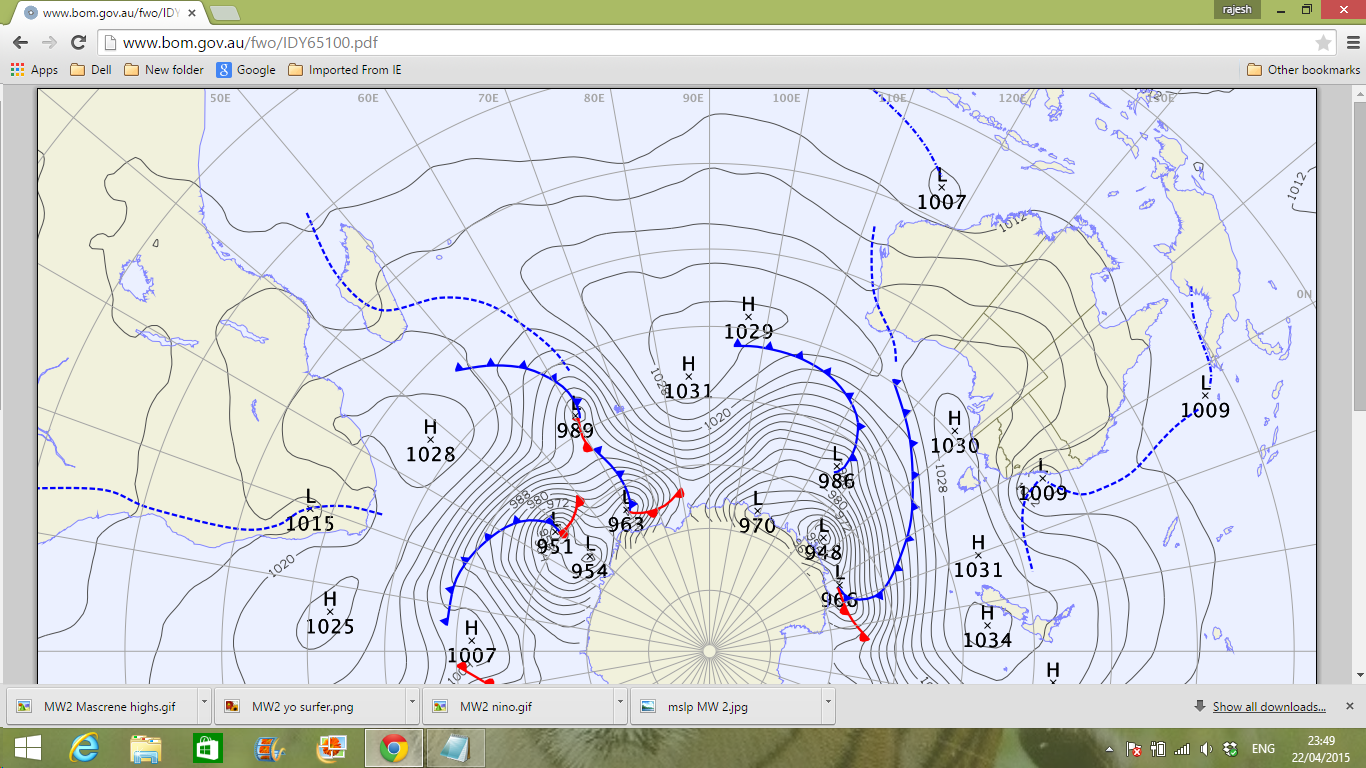 The "Power House" of the Monsoon winds is slightly behind schedule, for this time of the season.
Indicator: -ve

4. But the pre Monsoon Low in the Bay is still elusive. As discussed, we should normally see a low sometime after the 15th. of April. The high pressure region in the Bay, at sea
level, no longer prevails. I do not see much happening soon, as the region does not have the support of a strong MJO. A strong MJO would hasten the favourable formations and lows, with enhanced precipitation. We  see the MJO wave gradually weakening till 28th April at least. Seems will remain weak another 10 days thereafter.

Another factor, which helps the winds gain strength, and bring more moisture into the Indian landmass, is the sea temperatures on both sides of the Peninsula. Optimum (warm) temperatures will hasten and create more clouds, and help in faster forming of the lows from the Bay.
This parameter, is favourable compared to last year. See comparative SST Maps with Last Year

5. To bring the existing SE winds above the equator, the ITCZ should move northwards. Around 1st. of May, this should cross the equator. The ITCZ should now come back to its
Northward position, as the effective "Lows" created by the Rossby Wave have fizzled out. The Western end is still dipping to around 5S, but the Eastern end has moved Northwards and is almost at 10S.

Most parameters are balanced as of today. In today's situation, Monsoon arrival could be on normal dates in Kerala and the Bay Islands, and the NE states.
We will put up the estimated date of arrival in the MW-3.

But, situations can change fast, and by the time we discuss the next MW, some factors can suddenly become +ve or -ve. So, MW discusses and follows the developments as they
emerge, and discuss the parameters as is where is.
No model can commit from today when the Monsoon can arrive. Quantum of rain forecasting from April right through September is an impossible task. Things get clearer by last week of April. Vagaries' (in MW) normally remains true to estimates around early May.

Next MW up on 30th. April with firm Dates of Monsoon Arrival.

Thunderstorm lashing Bangalore at 7pm.. At Hosa road it turn dark at 6pm with gusty East winds then followed by huge lightning & thundering. Then at 6.30pm thick drop steady light rain started with continous flashes. Then medium to heavy rain from 7pm to 7.15pm. Now reduced to light rain with gusty SW breeze. Feeling chilly as temp has dropped to 22c!! Enjoying Bangalore weather to fullest. :)

Also reports coming of Hailstorm in some areas with water logging in many parts of Bangalore.

Max temp was 31.9c in afternoon. So overall nice weather in Blore today.

Trivandrum had a bout of thunderstorm again on 24th evening starting from 5 pm to over 6.30 pm. Earlier the city witnessed thunder activity and heavy downpour on 22nd April recording over 165 mms of rain. Yesterday's rain could be in the region of 60 to 80 mms.